Victoria Azarenka is a Belarusian professional tennis player, currently competing on the WTA. As well as reaching the top of the world rankings, Azarenka has reached four Grand Slam finals in her career, winning the Australian Open in 2012 and 2013 to become the first Belarusian to win a Grand Slam. Her other achievements include winning the bronze medal at the 2012 Summer Olympics in London, picking up two mixed doubles Grand Slam titles--the 2007 US Open with Max Mirnyi and the 2008 French Open with Bob Bryan-- and the mixed doubles gold medal at the 2012 London Olympics alongside Max Mirnyi. 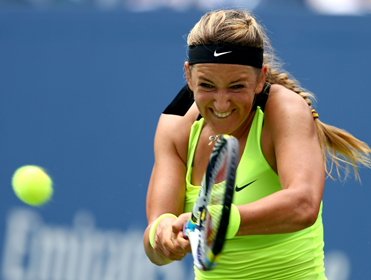 After moving to the United States at 15 years of age in order to further her career, Azarenka turned professional in 2003, making her first appearance at a slam in the 2006 Australian Open. In 2009, Azarenka reached her first Grand Slam quarter-final at the French Open, going on to repeat the feat at Wimbledon later that summer, a sign of the talent the youngster possessed.

Azarenka began the 2012 Australian Open as the third seed, going on to secure her place in a first Grand Slam final following victories against Heather Watson, Casey Dellacqua, Mona Barthel and Iveta Benesova in the early rounds, beating Agnieszka Radwańska in the quarter-final, defending champion Kim Clijsters in the semis to set up a meeting with Maria Sharapova in the final. Azarenka wasted little time in seeing off her Russian opponent, securing her first Grand Slam title with a comprehensive straight sets victory.

Victory in Melbourne saw Azarenka reach the top of the world rankings, and the Belarusian ended a successful 2012 by reaching the final of the US Open before losing to Serena Williams in the final. Azarenka began 2013 in impressive fashion, defending her title at the 2013 Australian Open, beating Li Na in three sets in the final to add a second Grand Slam title to her collection. The year followed a similar path to the previous season, with Azarenka going on to lose to Serena Williams in the final of the US Open for the second successive year.

Much of Azarenka's success stems from her strong two-handed backhand shot and powerful, relentless groundstrokes. The big-hitting Belarusian is widely regarded as one of the WTA Tour's most aggressive players, boasting a relentless but controlled aggression to manipulate opponents around the court and take advantage of matches.

For all the latest Victoria Azarenka Betting Tips place check out betting.betfair