Theo Walcott quickly rose to prominence at Southampton after becoming the south coast side's youngest ever player, making his debut as a substitute against Wolverhampton Wanderers aged just 16 years and 143 days. After scoring four goals in the opening five months of his first full season in the Championship with the Saints, he was purchased by Arsenal for the price of five million pounds, but didn't play a game for his new club until the start of the following season. 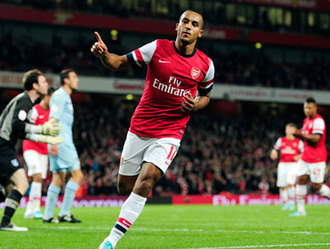 That didn't stop him being named in Sven Goran Eriksson's England squad to play at the 2006 World Cup however, and even though he didn't feature, he was already generating a significant buzz when his potential was debated.

The 2006-2007 season saw Walcott start to fulfill some of that potential, scoring his first goal for Arsenal in the League Cup on a run that saw Wenger's youthful side progress all the way to the final, where they were ultimately defeated by Chelsea in Cardiff. That year, he also became the youngest ever Arsenal player to represent the side in European competition when he appeared off the bench against Dinamo Zagreb in the third qualifying round of the Champions League.

As he has developed as a player, he has managed to combine the blistering pace which was his trademark as he broke through at Southampton with a more mature attitude, as well as an increasingly accurate final ball which was often frustratingly lacking during his opening few seasons in an Arsenal shirt.

In recent campaigns he has started to prove to Arsene Wenger that he can justify his demands to be played as an out-and-out forward rather than as a supporting winger, and even before one considers that he has picked up the No. 14 shirt left vacant by Thierry Henry, the comparisons with the former Juventus and Monaco player are obvious.

Both possess incredible change of pace, a deft first touch, and a striker's natural instinct for knowing where the goal is, and since the 2010-2011 season he has started to add this feature to his repertoire, a trend which saw him finish as Arsenal's top goalscorer in all competitions in the 2012-2013 season, with 21 strikes.

This was the first time he had ever passed the 20-goal mark for a season in his career, and with the youngster only just approaching the age where he will be expected to produce his best football, this feat appears only to be the start for Theo Walcott.

For all the latest Theo Walcott Betting Tips place check out betting.betfair