The Over/Under 2.5 Goals Column: Gerrard and Torres can Stoke the fire 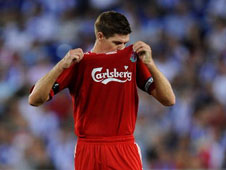 Steven Gerrard scored at the weekend from the penalty spot and could conspire with his mate Fernando Torres to make Stoke's visit to Anfield an "overs" affair.

"But with Gerrard and Torres paired up again the percentage chance is that Liverpool will score, and given a relatively poor show at White Hart Lane, the Reds will surely be rearing to put things right here. And don’t forget, Liverpool were the Premier League’s top scorers last term averaging 2.03 goals per game, scoring 41times at home and conceding 13."

Ed Nicholson looks to get his beloved over/under 2.5 goals back in black by focussing on midweek fixtures between Liverpool and Stoke and Birmingham and Portsmouth.

Liverpool were disappointing against Spurs on Sunday. They produced just three shots on target (SOTS) and scoring just once from the penalty spot in a 2-1 away defeat to Spurs. And Rafa Benitez will be looking for an improved performance on Wednesday night at Anfield against Stoke.

Stoke managed to secure just seven points on the road last year, but one of them came against the Reds. Liverpool had close on 70% possession on that occasion at Anfield in September and they had been in form, beating Man United a couple of matches previously, but could not convert one of their 11 SOTs or one of another 16 shots off target (SOFFs). Stoke managed just two SOTs and one SOFFs.

Since Fernando Torres and Steven Gerrard have played in the same team at Liverpool it has become an odds-on chance that at least one of them scores; although neither managed to do so in this fixture last term.

But with Gerrard and Torres paired up again the percentage chance is that Liverpool will score, and given a relatively poor show at White Hart Lane, the Reds will surely be rearing to put things right here. And don't forget, Liverpool were the Premier League's top scorers last term averaging 2.03 goals per game, scoring 41times at home and conceding 13.

Liverpool are expected to win this match fairly easily ([1.28] on Betfair at time of writing), but Stoke come here on good terms with themselves having won 2-0 at home against Burnley. Although the Potters only created five SOTs that day both goals came from set pieces, and although it's difficult seeing them breaching the Liverpool defence in open play, Liverpool's frailties from set pieces, which were exposed once again against Spurs, could see them score at least once this time.

Portsmouth looked poor at Fratton Park against Fulham on Saturday when losing 0-1. They managed just four SOTs and when you have to resort to bringing on Kanu and Nugent from off the bench to score goals you know you are struggling offensively .

Having said that, Fulham are a well-disciplined team at the back and so this result may be a little misleading. However, Pompey scored just 12 away goals all season - the 4th worst record in the league - and 12/19 away games ended in under 2.5 goal affairs.

Birmingham meanwhile started their campaign with a 1-0 defeat at Old Trafford. They played with just one up front and certainly cannot be analysed on the back of that one away performance. However, they did create chances; they had four SOTs and were unlucky that one of those didn't hit the back of the net. It was an encouraging offensive start for the promoted side.

These two sides have met four times recently with just one being a high scoring match, and the Blues are not known for scoring goals galore at home. Last term, albeit in the Championship, Alex McLeish's side netted just 30 times (10th best of the top half of the table) - but they conceded just 17 (2nd best in the top half of the table). Indeed only six of their last 17 home games have seen over 2.5 goal contests - and most of those were in the opening part of last season.

Portsmouth will be keen to take something from this game and I can see them playing with just one up front, while Birmingham traditionally find it difficult to score in front of their own fans - they have scored just 60 home goals in 42 league games; while the last time they were in the Premier League they scored more away from home than at St. Andrews. They only created 194 SOTs when in their last full Premier League season (only Derby with 181 had fewer) while their 160 SOFFs was the lowest 2007/8 total in the division.

With this game being played on Wednesday night, both teams will have one eye on Saturday's Premier League contests. Portsmouth travel to the Emirates while Birmingham are at home to Stoke. I feel the proximity of those weekend fixtures make the chances of a low scoring contest here a little more likely as both clubs would settle for a point going into those games.