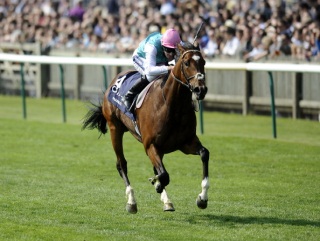 "Frankel has been given a provisional Timeform rating of 142."

Frankel has been given a provisional Timeform rating of 142 after his astonishing win in Saturday's 2000 Guineas at Newmarket....

His bare performance - in which he beat Dubawi Gold and Native Khan by 6 lengths and half a length, with the rest a very long way adrift - merited a figure of 137.

But the horse was a long way clear for much of the way and Timeform's racecourse reporter Jamie Lynch feels that giving the horse an extra two lengths over the winning margin is fully justified.

Do you agree with Timeform's rating for Frankel? Post your views below.