People run out of superlatives when talking about Lionel Messi. He is widely regarded as the best player in the world, whilst some believe he is the greatest player of all time. So, how does he compare with Diego Maradona and Pele, the two greatest players in the history of the game? 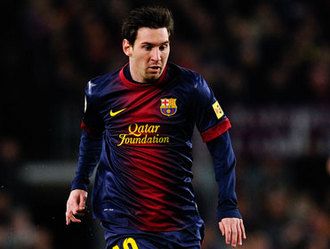 Messi made his debut for Barcelona back in October 2004. He has since gone on to make 395 appearances for the Catalan giants, scoring an astonishing 327 goals. To think Barcelona came close to releasing the starlet back in 2003 due to financial constraints! With Barcelona, the diminutive forward has won six La Liga titles and three Champions League titles. He has also won the Fifa Balon d'Or, the award for best player in the world, three times. However, whilst nobody can dispute his impressive club form, Messi has never been able to lead his country to success. He was present at both the 2006 and 2010 World Cups but couldn't guide Argentina past the quarter-final stage, and he hasn't managed to bring Copa America success to his nation either.

Messi is heralded as the next Maradona and it's not hard to see why. The rotund forward scored 311 goals in 589 games. At club level, he had considerably less success than Messi, only winning two Serie A titles and the Uefa Cup with Napoli. A Copa del Rey win with Barcelona rounds off his trophy haul, and this is all he has to show for his time in Europe. However, Maradona captained Argentina to World Cup glory in Mexico in 1986. Although many football fans, of course, remember his "Hand of God" goal against England, people are quick to forget his superb solo goal in the same tournament. Maradona single-footedly carried Argentina to World Cup glory. He is also the only player in the world to have broken the transfer record twice.

Perhaps the most famous name in football, Pele was the first player to score over 1,000 goals. However, due to many of these being in friendly fixtures, it is a disputed fact; the official record says 650 goals in 694 games, which is still just as incredible. The Brazilian talisman inspired his country to three World Cups. Real Madrid President and former player, Alfredo Di Stéfano, stated: "The best player ever? Pele. Lionel Messi and Cristiano Ronaldo are both great players with specific qualities, but Pele was better." Considering how good Stefano was, that is fantastic stament. The only drawback to Pele was the fact that his career was limited to Brazil and America; he never played in Europe.

The differences are thinner than a cigarette paper. Which player is better is ultimately a matter of subjective choice.

For all the latest Lionel Messi Betting Tips place check out betting.betfair