Crossroads of my life - busto! 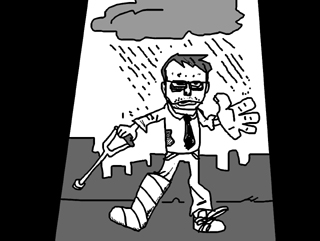 "So here I am, BUSTO, on the way to my own funeral, carrying my good health and heart in a bodybag - and dating my dick. "

There's a shotgun and a bank to the left, and a rope and a coffin to the right.

During times of crisis, such as the credit crunch shithole which the whole world is stuck in right now, it is common for larger companies to re-evaluate their assets and true value. There's hardly a bank anywhere in the whole world that hasn't made an extraordinarily large write-down lately.

It seems, the time has come, for me to make some write-downs as well. It's not easy to face the fact that all you got left, is worthless crap, and the fortunes you thought you build up, have actually become strays of hay, you're desperately holding on to.

So what happened to me?

Well, 2009 was literally "worse than I ever thought possible". Not only pokerwise, but life in general. Apart from not cashing in a single tournament, I can't recall dragging just one big pot in a cash game either. I'll spare you the endless list of suckouts, badbeats and tilt - let's just say, it was a sick, horrible fucking nightmare, and I sincerely wouldn't hope for this to happen even to my worst enemy.

On top of this almost every single investment I ever made, collapsed upon itself during 2009, and each and every son of a b***** that owes me money, decided to run and hide or simply tell me they were busted, and could never repay me.

As a little bonus, the Danish tax authorities, finally closed their case against me, and regardless of my full and thorough cooperation for years, I had to pay an unreasonably huge bill, with money I basically no longer had.

So I squeezed the last drop of blood out of my sore ass, and paid it all, and attempted to regain focus, and started thinking about my somewhat uncertain future. Thankfully, I still had my good health and my girlfriend, the love of my life.

Upon moving into my new apartment that, by the way, I can no longer afford, I caught the swine flu. This kept me down for a good while, and having only just recuperated, I broke my foot.

In the meantime, I had developed a serious case of chronic inflammation in all of my fingers. Unable to move around or even use my hands properly, I was successfully being prevented from working out. So I got completely out of shape, and started getting headaches, possibly from slamming a keyboard into my face a ridiculous amount of times in utter disbelief and dispair.

When life pulls these kind of unreal, unjustified tricks on you, there's a tendancy to go insane and start shooting random people around you. I didn't do that, but I did manage to get so messed up, that the love of my life, couldn't even stand me anymore, and left.

So here I am, BUST-fucking-O, on the way to my own funeral, carrying my good health and heart in a bodybag - and dating my dick.

It's time to write-down my assets, and from the looks of it, I can't even buy an ice cream.

The crossroad I'm standing at, offers no easy way out. There's a shotgun and a bank to the left, and a rope and a coffin to the right, and straight ahead lies the endless desert.

I know where I'm going, because you can't keep a good man down.... but it sure as hell feels like someone is trying their best.

More from the Betfair Poker Blogs