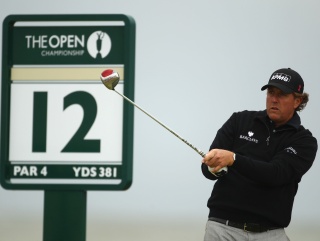 Is this Lefty's year?

Can Bill emulate his old man? Does Anthony have the game to improve on a missed cut and could this finally be the year that Phil masters links golf? These are some of the questions Dan Geraghty as assesses the PGA players who could cause an upset at Royal St George's.

Despite being a big PGA Tour fan, I'm inclined to agree with Mike Norman, in that the Open winner this week will be European. However, some of the Americans are sure to surprise and are worth supporting in the place markets.

Steve Stricker [34.0] has been in the top ten at the Open in two of the last three years. Anyone who watched him win his third John Deere Classic last week will surely be backing him to do so again. Stricker had 23 putts in round three before holing two wonderful putts on the last two on Sunday to claim the title. He must be so full of confidence with the flatstick right now, [4.1] for a top 10 looks more than fair.

Bill Haas [310.00] is unable to defend his Viking Classic in the US this week and he'll be determined to make up for that with a good performance at Royal St George's. I find that Haas is often underrated by the layers. He missed the cut on his Open debut last year but he's too good to ignore and getting Bill onside in the top 20 market is advised. His father Jay finished 19th on his second Open appearance in 1983.

Anthony Kim [400.00] isn't garnering many column inches as we approach this years Open and his price suggests he has no chance. The big problem with Kim's game right now is undoubtedly his driving, but we're led to believe that this year wayward driving won't be punished as harshly as last time at Royal St. George's. Kim had a fantastic Open debut in 2008 at Royal Birkdale and he was rewarded with a seventh placed finish; he missed out last year through injury but on his second trip to the Open in 2009 he was in contention before taking a nine on the second hole of his second round which led to a missed cut. He's shown excellent promise on these shores and his game is in better shape than his results suggest. Worth supporting in the top ten and top 20 markets at nice prices.

I'm hoping Phil Mickelson [48.0] was hiding his links light under a bushel at last week's Scottish Open. Phil wants a career Grand Slam bad and if the wind stays away (the forecast says it won't be blowing too hard), his touch around the greens is too good to ignore. Sure, his Open record is terrible but he did at least come third at Royal Troon in 2004 and a very small top 10 play won't hurt. Come on Lefty!

Rickie Fowler [120.00] has a good draw playing with Rory for the first two days. The two are often paired together and inspired each other to fine starts at the Masters in April. Rickie was 14th on his Open debut and many (including the Punter and Paul Krishnamurty) are tipping him to improve on that this week.

I kept a close eye on David Duval [900.00] at last week's John Deere Classic where he shot 75 in the first round followed by 70 in round two to miss the cut. Although I'd imagine his mind was straying to this week's Open Championship so I'm willing to forgive him. His putter was stone cold, which is a worry but the ability is still there and these big events get his juices flowing, he's worth a very small investment.

Gary Woodland [350.00] is one of the few Americans who played in the Scottish Open last week, he missed the cut but his first competitive visit to these shores can only have improved his chances of some success this week. The monster hitter has a big future in the game and a top 20 this week is far from out of reach.