Find Me a 100 Winner: Five huge-priced picks at The Open! 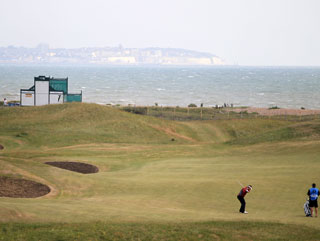 That tiny figure in red is Jeff Overton, practising at Royal St George's this morning

"Rickie Fowler and Robert Rock are no slouches off the tee, and these course conditions also bode well for [160.0] chance Jeff Overton. The big-hitting American put up a feisty performance over here in the Ryder Cup, and has also fared well in the Open, making the last two top-15s."

Five of the last 12 champions have gone off at [300.0] or bigger so consider one or more of this quintet for your Open bets

In addition to being the best week of the golfing year, three reasons explain why the Open is the event for which I most enjoy writing this column. Firstly, outsiders have a great record in The Open, with five of the last 12 champions starting the week at [300.0] or more, (not that I backed any of them beforehand!). Secondly as a major, there's never any shortage of high-class or in-form candidates. Thirdly, one can usually write off half the field due to serial failures under links conditions. Consequently, I'm going in with a bigger team than usual, with five picks.

There will be wild celebrations at betting.betfair.com if Rickie Fowler wins The Open. Dan Geraghty is a fully paid-up member of the Fowler fan club and Romily Evans rates him the next American golfing superstar. Steve Rawlings has backed him to be top American, and I'm getting onboard the bandwagon here with a win bet at [120.0].

Fowler's been on my mind for this ever since last year's Open debut. Rickie begun his Open career with a disastrous 79 in ideal scoring conditions at St Andrews, looking certain to miss the cut, but fought back superbly, shooting lower than anyone else over the final three rounds for a most respectable 14th place.

Another common fancy this week is [150.0] chance Robert Rock, who I'm pretty sure Steve will also be tipping later. As a recent winner, Rock has no worries on the form front, and has twice played well in past Opens. Last year's seventh at St Andrews was only behind McIlroy amongst those with a bad draw, whose winning chance disappeared during appalling Friday afternoon conditions. Interestingly, Robert made the top-20 when a much inferior player back in 2006 at Hoylake.

Of all recent Open venues, Hoylake strikes me as bearing the closest resemblance to Sandwich, particularly with regard to the shortage of penal rough. The consequence then was an advantage to big-hitters, and I can see something similar occurring. Power off the tee will enable players to attack the easier holes with relative impunity or when caution is required, leave their driver in the bag. For me, the key stats to follow will be driving distance and, as always, greens in regulation.

Fowler and Rock are no slouches off the tee, and these course conditions also bode well for [160.0] chance Jeff Overton. The big-hitting American put up a feisty performance over here in the Ryder Cup, and has also fared well in the Open, making the last two top-15s. Third place last time out at Aronimink confirms his case on recent form.

Another very big-hitter at a frankly insulting price is Nicolas Colsaerts at [200.0]. The Belgian could be this year's most improved player, transforming from largely anonymous non-winner to one of Europe's top men. He won the China Open, and played superbly at the World Matchplay until the last few holes of his semi-final against Poulter. In the last fortnight, he's finished third at Castle Stuart, following on from 11th in Paris, on a course where he'd never fared well before.

I laid out the case for Joost Luiten last week, and while he failed to deliver in Scotland, this fine prospect is simply too big to ignore at [480.0]. Luiten ranks first in the key greens in regulations stats on the Euro Tour over the past three months. I'm also hopeful, on the basis of long-range weather forecasts, that he has the ideal early-afternoon tee-time, with regards avoiding the worst of the wind.