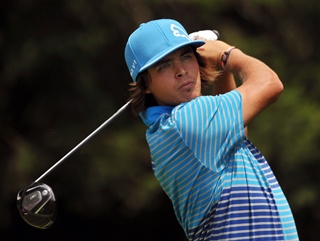 “If a player such as Curtis could win his first ever event here, why on earth can’t Fowler?”

The Punter takes a look at the American challenge at Royal St George's, where he fancies young Rickie Fowler to put in a strong performance....

We have to go right back to Phil Mickelson's emotional win at last year's Masters for the last American major winner and many a pundit expects that poor US run to continue. Rightly or wrongly the perception is that our friends from across the pond struggle with Links golf and if you look at last week's Barclays Scottish Open, played at the Castle Stuart Links, where Matt Kuchar was the only American to finish in the top-57, that perception is hard to get away from.

As Romilly Evans highlights here, many an American has been somewhat uncomplimentary of this Championship but when you look at recent results they've actually fared rather well. Indeed, when winning in 1983, Ben Curtis was one of three Americans to occupy the first five places and over the last 16 years the Claret jug has gone back across the Atlantic on no fewer than 11 occasions. Tiger was responsible three times but that still means that half of the last 16 Open Championships were won by Americans- other than the great man. Maybe we should be looking Stateside for the winner after all.

Of the many attempting to return some honour to the US after their major barren spell, it's Rickie Fowler that I fancy the most. Romilly also gives a good word for him here but I'm even more bullish about young Rickie. Now trading at a very tasty [120.0], for my money he's the best value in the field and it makes absolute sense to back him in this market too.

Last year was his first Open Championship and boy did he catch the eye. He opened up with a dreadful 79 but followed that with rounds of 67, 71 and 67 to climb up from 149th after day one to a tie for 14th. He also played superbly at the Walker Cup in 2007 at the Royal County Down Links. Make no mistake, Links golf doesn't scare Rickie.

Punters have been spooked by yet another dreadful effort in-contention last time out (at the AT & T National) but if a player such as Curtis could win his first ever event here, why on earth can't Fowler?