Golf > The Open > The Open Three-Ball Tips: Six of the best for day one

The Open Three-Ball Tips: Six of the best for day one 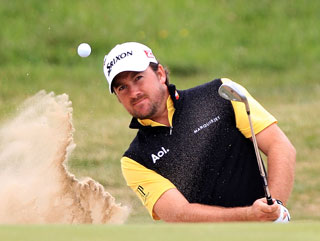 "Gmac might not have to do anything special to win this three-ball, so must rate a solid favourite."

Paul Krishnamurty outlines six groups to follow on day one at Royal St George's with a wager for each - enjoy!

Back Rickie Fowler 2u @ [4.1] (vs McIlroy, Els) (Starts 09.09)
As if our appetites need whetting, the three-ball that will open the live BBC coverage is truly one to savour. In place of the absent Tiger Woods, a regular in this prestigious slot, tournament favourite and man of the moment Rory McIlroy. The greatest links player of his generation, Ernie Els. Finally, America's next golfing superstar Rickie Fowler, who seems to be carrying the entire betting.betfair.com team's cash this week.

Having already backed him to win the title, Fowler has to be my bet as the outsider of three, although I don't underestimate the task in hand. Sandwich looks absolutely perfect for McIlroy, but short odds merely reflect his chance. Rory might well repeat last year's 63, although I'm not sure the forecast wind will suit him. Again, in a different group it would be easy to make a case for Els. If he could somehow get the putter working again, Ernie could make dismissive quotes of [95.0] look silly. Until he shows some sign of doing so, he's hard to consider.

Lay Luke Donald 5u @ [2.1] (vs Garcia, Ishikawa) (Starts 09.20)
Hot on the heels of that star-studded trio, world number one Luke Donald opens his campaign. It is impossible to pick holes in Luke's season, which reached a new height with a stunning victory at Castle Stuart on Sunday. Nevertheless on the bare facts of ten previous Open attempts, Donald has everything to prove, having never bettered 35th, before finishing 11th and fifth in the last two Opens. Even on those recent occasions, he stayed on from a long way back and never contended. He's only once bettered 70 in the first round, which without improvement will make him an extremely vulnerable favourite against strong opposition here.

Sergio Garcia has rock-solid Open pedigree, with seven top-15s this century. He might be a man to avoid down the Sunday stretch, but there's no reason to think he shouldn't start well. Outsider Ryo Ishikawa is no mug either. The Japanese teenager hit 68 in the opening round of the last two Opens, and made the top-30 in both the Masters and US Open this year.

Back Joost Luiten 4u @ [3.3] (vs E Molinari, Howell) (Starts 12.37)
I've already made the case for Luiten as a speculative [480.0] chance in the outright market, and the promising young Dutchman also rates the best opening day value as the outsider in this extremely winnable group. Howell is favourite on the basis of his PGA Tour form, ignoring the fact that he's never shown any suitability whatsoever for links golf. He's missed his last four Open cuts, and never bettered 70 in 16 rounds.

Molinari played fairly well in 27th last year, but was in much better form then. He hasn't made a top-ten since January, and really doesn't deserve to be rated behind the consistent Luiten on recent numbers.

Back Graeme McDowell 4u @ [2.5] (vs Day, Watson) (Starts 13.43)
While this is another high-class group, only McDowell can really be described as a solid candidate for the title. There is no greater fan of Jason Day than me, but playing in the John Deere Classic was far from the ideal preparation for his Open debut. Granted the young Aussie performed amazingly well to be runner-up on both Masters and US Open debuts, but links golf is a different matter. Without more experience, success in this major is unlikely.

Nor is there anything positive to take from the fact Bubba failed to make the cut or par in both previous Open attempts. Plus after his French Open tantrum, there must be doubts about his mindset away from home. Gmac might not have to do anything special to win this, so must rate a solid favourite.

Back Martin Kaymer 4u @ [2.4] (vs Oosthuizen, Mickelson) (Starts 14.21)
Opposing Phil Mickelson in the Open has repeatedly paid dividends over the past two decades, and there was nothing in last week's 58th place at Castle Stuart to encourage a change of tack. He certainly rates well behind Martin Kaymer in the list of likely champions, as the German apparently loves the links golf that Mickelson seems to hate. In winning last season's Race to Dubai, Kaymer produced arguably his best golf on links layouts at the KLM Open and Dunhill Links. Seventh place in the Open would have been better without a disastrous finishing stretch.

As for the third man, Louis Oosthuizen must warrant respect as defending champion, but remains way down golf's pecking order compared to these opponents. Prior to St Andrews, Louis had never shown any aptitude for links golf, and until he proves otherwise, will always be regarded as a freak winner.

Back Tom Lehman 5u @ [2.5] (vs Palmer, Wootton) (Starts 15.38)
Finally in one of the latest groups out, 1996 champion Tom Lehman takes the eye in a potentially weak group. Despite his advancing years, Lehman has made his last four Open cuts and finished 14th at St Andrews last year. As a three-time winner on the Champions Tour this year, form is obviously good, so there's no reason why he can't maintain that solid tournament record.

His principal opponent Ryan Palmer is making his Open debut, and did little last week at Castle Stuart to suggest any aptitude for links. Palmer is capable but inconsistent, and the available evidence points to this being one of the bad weeks. The third man and rank outsider in this group, Adam Wootton, is an Oxfordshire professional with no previous top-level pedigree.