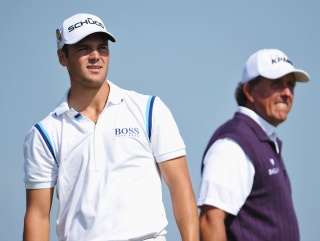 "With only seven shots separating first and last, anyone left can still win."

The world's top two may have gone but, at the half-way stage, the Open Championship is a thriller which anyone can win. Paul Krishnamurty tells us who we should keep an eye on between now and Sunday tea-time.

There was a widespread feeling pre-tournament that this would be one of the most competitive Open Championships ever. Even after the cut, and the elimination of many leading candidates including the world's top-two ranked players, Luke Donald and Lee Westwood, that remains very much the case. With only seven shots separating first and last, anyone left can still win. Moreover, only three of the 18 players currently under par started the week at less than [200.0].

Add a typically harsh British weather forecast, with 25mph winds and rain, and we have the perfect ingredients for a dramatic, volatile weekend. One might think, therefore, that this was ideally set-up for a huge-priced outsider coming from well back, and indeed, I couldn't resist having a nibble first thing this morning on Paul Casey and Henrik Stenson at [450.00] and [680.00] respectively. However, before blindly laying all the leaders, a cautionary note about the nature of Royal St George's is required.

In the last four Opens at Sandwich, the winner came from no further than three behind at halfway. Making up ground is never easy here, because there are so few birdies on offer. Even yesterday in relatively benign conditions, the lowest score was a three under-par 67. Of course there's bound to be one or two good rounds today, but generally this will be a case of hitting greens in regulation, accumulating pars while others fall away. Nor is this quite as wide-open as the leaderboard suggests. Assuming the weather is really bad, these are specialised conditions which won't suit many players. Just among the big-names, for instance, Rory McIlroy and Phil Mickelson have little pedigree for bad-weather golf.

After opting out of an outright bet yesterday, the time is ripe for a substantial outlay in the tournament winner market. All four Find Me a 100 Winner picks (Colsaerts was a non-runner) made the cut, and while they're all still big prices, I'm quietly confident at least one will hit their lay target. In addition to cheering on that trading system, I'm having four new picks.

Firstly, this may not seem the ideal time to be backing a favourite, but Martin Kaymer represents perfectly good value at [7.8]. Prior to the tournament, Kaymer had a reputation as the leading links golfer, after winning last year's KLM Open and Dunhill Links, and the evidence so far seems to confirm that opinion. Whereas everyone else on the leaderboard has had to play really well to get there, holing plenty of putts and scrambling brilliantly, Kaymer has eased to third place without extending himself. Had the German putted well, he'd be two or three clear by now. Especially given the course trends favouring those near the lead, it is very hard to imagine him not being bang in contention tomorrow.

Next, one of the very best bad weather specialists, Adam Scott at [34.0]. Considering he's only three back, these are very attractive odds about a prolific winner who was second at the Masters. Most of those wins came on rain-softened greens, and he should relish the increased wind speed.

Of those further back, two more Aussies take the eye at silly prices. Robert Allenby and Richard Green are both great ball-strikers and from five shots behind the pace, are close enough to get right into contention without doing very much. Interestingly, both men enjoyed their best Opens when the weather was bad - Allenby finishing seventh at Royal Birkdale in 2008, Green staying on strongly for fourth place as the weather deteriorated at Carnoustie in 2007. At [260.0] and [400.0] respectively, this pair are well worth backing today in the hope they'll be much shorter tomorrow.

The Australian theme continues in the 2-balls, where Jason Day rates the day's nap against Bubba Watson. After the latter's tantrum at the French Open, many of us were sceptical about Bubba's suitability to a gruelling Open. He's actually done better than expected so far, but I don't reckon he'll enjoy the weather. Day has already shown his liking for major weekends, by finishing runner-up in both the Masters and US Open.

Finally, all eyes will once again be on Rory McIlroy, who partners Rickie Fowler for the third day running. So far they're tied on level par, with each man winning one round each. That in itself might be a small sign to back Fowler as clear outsider, and the weather forecast suits the American better. Whereas Rory's record in strong winds is poor, Fowler was magnificent in last year's Open once the weather turned sour.