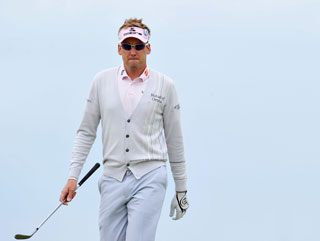 "With wind and rain on the way, it would be rude not to mention the 1999 Open champion. Lawrie is renowned for his prowess in such conditions, which might enable some sort of recovery from a disappointing 73 start."

Normally, the beginning of day two in a major is the ideal time to build a portfolio in the outright market. Numerous candidates have blown their chances on the first day, and it is usually possible to identify the dozen or so players expected to contend over the weekend.

Because of the weather forecast at Sandwich, however, it might pay to wait until tomorrow and 'moving day', or at least until today's morning starters have finished their rounds. At the time of writing, conditions are perfect and low scores are expected in the morning session. From mid-afternoon, the wind is forecast to increase and bad weather to persist throughout the rest of the tournament. Players out on the course now appear to have a significant advantage, just as they enjoyed yesterday.

So while day one was a profitable start to proceedings, with four winners from six bets, I'm keeping my powder dry in the outright market until this morning's movers are known. Instead, here are five three-ball tips for the afternoon session.

Back Stephen Gallacher 4pts @ [2.7] (Haas, Fujita) (Starts 12.59)
Now the weather is turning for the worse, we can expect to see the difference between links specialists and the rest accentuated. Stephen Gallacher won this group by two shots yesterday, and rates a rock-solid pick to follow up. Neither opponent has any notable links or bad weather pedigree, whereas Gallacher has often saved his very best form for wet and windy conditions. In fact at [580.0] despite remaining in contention on level par, the Scot is the sort of outsider trade that often pays dividends in this major.

Back Ian Poulter 5pts @ [2.4] (vs Johnson, Ikeda) (Starts 13.43)
Dustin Johnson has been feeling unwell and relying on antibiotics, which is hardly the ideal preparation for a gruelling round in bad weather on a links course. Dustin looked set to miss the cut for the first two thirds of yesterday's round, before a remarkable stretch of red figures that included a hole-in-one. That run isn't enough evidence to dispel pre-tournament doubts about his limited experience of this form of golf. In contrast, Poulter started well and looks a strong candidate for the title. The emphasis on good scrambling around Sandwich really plays to Ian's strengths. Outsider Ikeda played really well to break par yesterday, but will do well to repeat the trick.

Lay Rory McIlroy 5pts @ [2.06] (Starts 14.10)
A one-over par 71 wasn't a disastrous start for Rory, but it didn't dispel concerns about his lack of bad weather credentials. Remember this day 12 months ago, McIlroy shot 80 in appalling conditions at St Andrews. With 20mph winds in store, it would take a brave man to overlook those concerns and back him at just above even money, especially given the quality of opposition. Rickie Fowler won this group for us yesterday, and is nicely positioned for his many supporters on these pages. Ernie Els, one of the finest bad weather players of all-time, arguably played better than suggested by 72 yesterday, and could also set a stiff target for McIlroy.

Back Anders Hansen 4pts @ [3.2] (vs Goosen, Mahan) (Starts 14.32)
This doesn't look like being a fun afternoon for those struggling to make the cut, and players in that position could be forgiven for lacking focus and motivation. Given that both Hunter Mahan and Retief Goosen seem likely to miss the weekend, Anders Hansen must represent some value as the outsider of three. While his opponents started with 75 and 76, in-form Hansen broke par, setting up a good chance for the weekend.

Back Paul Lawrie 4pts @ [2.9] (vs Noren, Na) (Starts 15.16)
Finally, with wind and rain on the way, it would be rude not to mention the 1999 Open champion. Lawrie is renowned for his prowess in such conditions, which might enable some sort of recovery from a disappointing 73 start. Of his two playing partners, Kevin Na is happily opposed as a visitor with minimal links experience or pedigree. Wales Open winner Alex Noren represents a more threatening proposition and after shooting 69 yesterday, could well enjoy another good week. The Swede is notoriously inconsistent though, and worth taking on.