Golf Betting: Who will be 2012's big improvers? 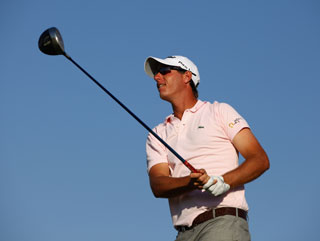 The sky's the limit for Nicolas Colsaerts

"I'm expecting a strong start during the Gulf Swing to elevate Colsaerts to the world's top-64, therefore qualifying for the WGC Matchplay, from which point the sky would be the limit. A Ryder Cup place is a perfectly realistic aim."

Charl Schwartzel, Bill Haas and Nick Watney were three of Paul Krishnamurty's four golfers to watch last year - so who's he gone for this time round?

It's almost 12 months to the day since I wrote my favourite piece of 2012. Entitled "Four who can follow in Gmac's formidable footsteps", the aim was to find the players who, like Graeme McDowell in 2011, looked capable of significant improvement and transforming their status in the game. The essential difference with any other 'players to follow' piece was to ignore the blindingly obvious. There would be nothing particularly original, for example, about predicting Rory McIlroy to win another major this year.

Of the four players picked, Charl Schwartzel broke into the big-time by winning the Masters at huge odds. Nick Watney won two events including one of the World Golf Championships, en route to finishing third on the money list, earning over $5M. Bill Haas won the $10M Fedex Cup after landing the richest play-off in history at the Tour Championship. As for the fourth man Joost Luiten, well he was rather expensive to follow, but did establish himself as one of the European Tour's leading lights, and eventually broke his duck after a plethora of near-misses. In the interest of balance, however, I must add that Webb Simpson undoubtedly improved more than anyone else last year, and he was nowhere near my radar.

All of this year's quartet begin the season ranked outside the world's top-50. First up, I am in total agreement with Dan Geraghty concerning the enormous potential of Gary Woodland after watching his outstanding rookie season. His massive power is obviously a huge asset, but a particular reason to expect improvement is that his weaknesses are glaring, and bound to be ironed out over time.

Like so many inexperienced players, Gary is very amateurish with his short irons and around the greens, and therefore has the potential to knock several shots off his average weekly score with a bit of work. A significant clue with both McDowell and Schwartzel was their improving returns in majors, after a series of solid finishes. Similarly, Woodland made the top-30 in all four 2011 majors, despite virtually no experience whatsoever of championship golf. He begins the year ranked 52nd, but fancied to make the top-ten before long.

Next, I'm going for a player with Luke Donald-like tendencies, in terms of his proficient iron play, short-game, and growing maturity. Until finally landing his maiden title in the penultimate Fall Series event, Kevin Na had infuriated those of us who've kept a close eye on him ever since he made an immediate impact as a teenager on the Asian Tour. In short, Na was great at making top-tens, but rubbish whenever the pressure was on. With the monkey now removed from his back, one would hope he'll cope better in contention, and his opening effort at Kapalua over the weekend was encouraging. At 28, Na is still the right side of 30, which seems to be roughly the age when players reach their peak.

Nicolas Colsaerts was making fast headway until a mid-season injury interrupted his progress, and the Belgian remains a player capable of advancing considerably on his current 72nd place in the world rankings. After winning the China Open in some style, Colsaerts showed great aptitude for head-to-head golf when reaching the semis of the Volvo World Matchplay. His prodigious power off the tee is always going to offer a significant advantage, particularly on wide-open layouts, and his iron play is pretty tasty too, ranking fifth for greens in regulation throughout 2011 on the European Tour.

I'm expecting a strong start during the Gulf Swing to elevate Colsaerts to the world's top-64, therefore qualifying for the WGC Matchplay, from which point the sky would be the limit. A Ryder Cup place is a perfectly realistic aim.

Finally, it may be a little too soon for George Coetzee when it comes to the very biggest events, but the young South African is an outstanding long-term prospect. Again, the most interesting thing is his glaring weaknesses, particularly course management and pace of play. Anyone who can throw away so many shots on a regular basis, yet still reach the world's top-100 in short time, clearly has plenty of improvement in hand. Coetzee really should have won on the European Tour by now, although seven top-four finishes last season still points to a very bright future. Fifteenth place in the Open, for a player with very limited links experience, was another eyecatcher.