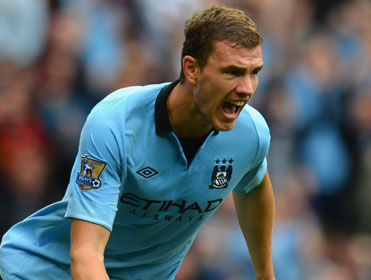 Edin Dzeko is the ace goalscorer of FM10. His height, allied to high ratings for heading, first touch, finishing, passing, technique, jumping and acceleration make him a perfect target man.

Football Manager 2010 is out and ruining relationships across the land. Dan Fitch pinpoints the players you should sign to get to the top.

Football Manager 10 is now available and I have been sending my virtual scouts out to find me the best players to sign. The results are in and my cheque book is poised...

Here are the 10 players you must sign on Football Manager 2010.

Yes, you read right. Beckham may be getting on, but he still has the ability to play at the top level for at least another couple of seasons and can be picked up for as little as £700,000.

With the ability to play as a central midfielder and wide on the right, Beckham is a great quality squad player at a bargain price. With his corner and free kick taking ability, he will soon be flying up the assists charts and scoring crucial goals.

Every great team needs a great goalkeeper and with Casillas and Buffon difficult to prise away, then Russia's Igor Akinfeev is the best you can get.

With high ratings in handling, one on ones, reflexes and positioning, Akinfeev is a brilliant shot stopper who will save your team from defeat on countless occasions.

Unless your keeper at the start of the game is really poor, it may be worth waiting until the second or third season to pick up Akinfeev, as his value tends to decrease in this period.

If your team is after an attacking full back, then Diego Renan is your man. Crucially Renan can play on both the right and left sides, making him a very handy man to have in your squad.

Like most Brazilian full backs, Renan is very comfortable going forward, possessing good stats for crossing and long shots, along with high marks for acceleration and pace.

As Renan is uncapped it's likely that he might struggle to earn a work permit for British sides, though it should go through after an appeal.

This Argentinean defender can be picked up relatively cheaply and will mature into one of the best centre backs in the game.

Initially his heading is a weakness, but this can be improved with training. Otamendi has high ratings for marking, tackling, positioning, strength, acceleration and pace, so team him up with someone good in the air and watch his value soar.

This young wonderkid will cost a pretty penny, but at just 19 years old you'll be getting an attacking midfielder that can be doing the business for your team, for years to come.

Jovetic is a two-footed player who is at his best when drifting infield from the left and cracking powerful shots with his right. This boy will get you goals.

His dribbling, finishing, first touch, creativity, passing, technique, acceleration and pace are all worthy of a top team and he will only get better as he matures.

Flair players are all well and good, but they can't function without a water carrier to do all their dirty work.

Finding the perfect man for that 'Claude Makelele role' can be tough, but for our money the best you can get is Veloso and what's more, he can play a bit too.

Veloso has all the attributes that you'd expect from a top defensive midfielder, such as passing, tackling, technique, positioning, teamwork and strength, but also possesses a cracking long shot in his arsenal and is a deadly free kick taker.

Everyone wants a Gerrard or Lampard in their team; a central midfielder whose goal tally is guaranteed to be in double figures each season.

Step forward Marek Hamsik of Napoli. The Slovakian is brilliant at ghosting into the box unmarked. Play him as an attacking box-to-box midfielder and you won't go far wrong.

Balotelli is still one of the best players available, though he'll prove more expensive on this version of the game.

If you can raise the funds though, you'll find that it will be worth it. Though most effective as a central striker, Balotelli is also comfortable on as an attacking midfielder on either flank, making him an important addition to any squad.

Balotelli has everything a forward needs, with impressive scores for dribbling, finishing, technique, aggression, acceleration, pace and strength.

If you like to play with an attacking midfield playmaker, who operates behind the strikers, then Yoann Gourcuff will exceed your expectations.

Also able to play in the centre and the right hand side of midfield, Gourcuff excels when played in the hole between the opposition midfield and defence, where the space is perfect for his long range shooting.

When all's said and done, it's goals that win you games. Finding someone who can score 30 goals a season is the difference between winning the league, or being an also ran.

Edin Dzeko is the ace goalscorer of FM10. His height, allied to high ratings for heading, first touch, finishing, passing, technique, jumping and acceleration make him a perfect target man.

Wolfsburg will make you sweat to get your man, but it will be worth it.

Most of these players will be appearing in South Africa this summer. Check out all the latest World Cup Odds in our dedicated World Cup section.