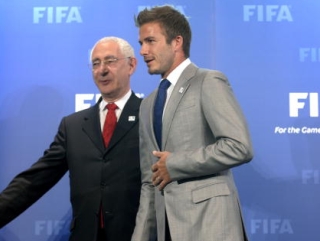 Lord Triesman gets advice from someone with experience of a tabloid scandal.

Did you not stop and think how many copies you might have sold in 2018 if you were reporting the news of a 32-year old Wayne Rooney scoring the winning goal in the World Cup final at Wembley?

England's bid to host the 2018 World Cup has been damaged and Dan 'The Betting Man' Fitch thinks The Mail On Sunday only has itself to blame.

You'd think that The Mail On Sunday would be a rather contented lot at the moment, what with David Cameron safely positioned within Number 10.

Perhaps they're still smarting from the fact that the likes of Nick Clegg and Vince Cable will be popping round there for tea a couple of times a week. Because there's certainly something that's kept The Mail hate-filled and spiteful, at a time when they should be running barefoot through the park.

I refer of course to their stitch up job on Lord Triesman, which was published in The Mail On Sunday. The rag published transcripts of a private conversation between the FA chairman and his former mistress Melissa Jacobs, in which Triesman alleged that Spain and Russia could be conspiring to bribe World Cup referees.

Now as a Labour peer, I would expect The Mail to go after Triesman under normal circumstances, but is it too much to ask that they might have showed some restraint considering that the man in question is at the very heart of England's campaign to host the 2018 World Cup?

They would probably argue that it is in the national interest to report this story, but in truth, this is a story that only exists because The Mail On Sunday were willing to publish it.

Lord Triesman accusing Spain and Russia of potential corruption is only a story if his dining partner is wearing a concealed recording device and The Mail's hacks are ready and waiting to write it up.

Otherwise it's just an example of a bloke talking nonsense in an effort to impress a younger woman and get his leg over. That something that happens every day, all over the country. I'd even wager that some of The Mail's saintly journalists may have indulged in such behaviour.

Triesman didn't go on television and make these claims. He made them to someone he thought he could trust in a private situation.

Now that those private comments have been made public by The Mail, Triesman has been forced to step down as the FA chairman and our campaign to host the World Cup in 2018 has been tarnished.

We're still the [2.6] favourites to be awarded the tournament, ahead of Russia at [3.45], Australia at [5.0] and Portugal and Spain's joint bid at [8.0], but it really should be a foregone conclusion.

With the 2010 World Cup to take place in South Africa and 2014 awarded to Brazil, the tournament will surely go back to Europe, which rules out the Aussies. Spain had it back in 1982, whilst Russia doesn't have the facilities or the infrastructure to host a World Cup of the quality that we could provide.

Thanks to The Mail, what could have been a simple decision for football's governing bodies, may now be much harder. Most of the world think we're arrogant gits at the best of times and this story will only have made things worse.

Was it really worth potentially ruining our World Cup bids, just to get one over a Labour member and to sell a few extra copies? Did you not stop and think how many copies you might have sold in 2018 if you were reporting the news of a 32-year old Wayne Rooney scoring the winning goal in the World Cup final at Wembley?

If we fail in our bid to host the 2018 World Cup, then I've no doubt that The Mail will be blaming Lord Triesman. The truth though, is that they should run the following headline in such a circumstance:

'We Cost Our Country The World Cup'.

Just stick to Diana stories and slagging off Jonathan Ross is the future.