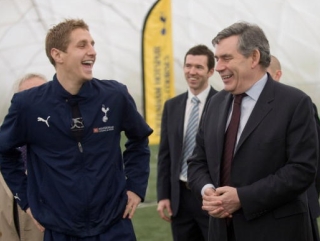 Two men who have experienced a fall in popularity.

Arsenal have built a new stadium, but you don’t see their players falling all over the place unless they’re tripping over Lionel Messi’s shadow.

Dan 'The Betting Man' Fitch is pretty cut up over Tottenham's semi-final defeat, but not as cut up as the Wembley pitch. How difficult can it be to lay a glorified lawn?

Over the weekend the two FA Cup semi-finals were played at Wembley and various people have spoken out about how they think it is wrong to use the stadium for these games.

Their point was that playing the semis at the national stadium dilutes the thrill of getting to Wembley for the final. It's a viewpoint that I strongly agree with, but having witnessed these two games I'm also wondering if it's right to play the final there.

The reason is the state of the pitch. When Chelsea play it's pretty normal for Didier Drogba to struggle to stay on his feet, but everyone was falling over as if they'd been shot during the weekend's two games.

In fact, Portsmouth's opening goal against Tottenham was a direct consequence of Michael Dawson slipping around as if he were Todd Carty on Dancing On Ice. Spurs played so badly that you can't blame their cup exit on the pitch, but it certainly had a direct influence on the course of events.

Instead of a tightly fought London derby between Chelsea and Spurs, we're now likely to have a very one-sided FA Cup final when Carlo Ancelotti's team meets Porstmouth. This is reflected in Chelsea's price of [1.17] to win the cup, with Pompey at [6.4].

Harry Redknapp described the Wembley turf as being rock hard, wet on top and impossible to play on. James Milner also criticised the surface after the Carling Cup final and found himself changing his boots in an effort to stay standing on Saturday.

That Carling Cup game saw Michael Owen tear his hamstring, with his manager Alex Ferguson claiming that the pitch contributed to the injury. Owen probably wouldn't have made the World Cup squad even if fit, but it would be a sad irony if one of Fabio Capello's likely choices were to pick up a knock due to the poor quality of the FA's own turf.

Surely it can't be that difficult to get right? Arsenal have built a new stadium, but you don't see their players falling all over the place unless they're tripping over Lionel Messi's shadow.

The pitch is managed by the Sports Turf Institute and in three years has been re-laid ten times at a total cost of around £1m. It has been suggested that the reason the pitch is so bad is due to the amount of times it is used for non-football events such as concerts. These are a necessary evil in order to pay off the cost of the stadium, as are FA Cup semi finals.

After all that it will probably resemble a ploughed field. Green Day are playing Wembley on the 19th June, but maybe they should book The Wurzels to play instead.

In regards to England's friendly against Mexico, can I be the first to suggest that we don't play Wayne Rooney in this game? He shouldn't even be allowed in the stadium just in case he starts trying to twist Fabio's arm. England are [7.4] to win the World Cup, but without Rooney you might as well multiply that price by a hundred.

Players used to dream of playing on the hallowed turf of Wembley, but now they only have nightmares. Let's hope that this issue gets sorted out over the summer.