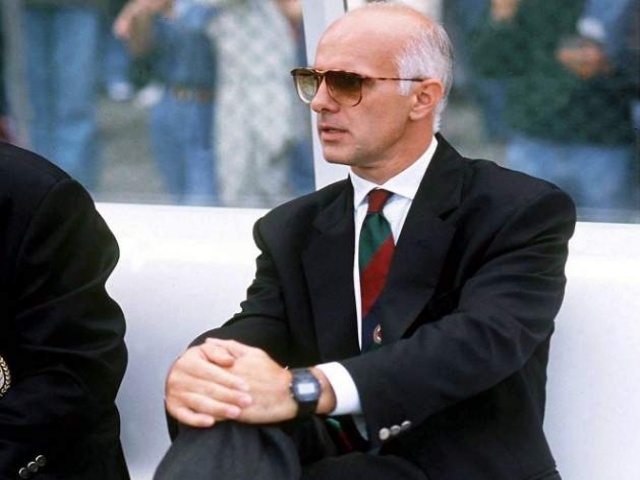 Not bad for a former shoe salesman. Arrigo Sacchi (pictured in his Parma days) was the last manager to win back-to-back European Cups

"Ex-shoe salesman Arrigo Sacchi articulately reminds us that a jockey does not need to be born a horse to ride."

We can all list the great modern-day managers who were brilliant players but for each of those there's a top gaffer who was an ordinary player or who never played the game at all. Paul Moon looks at those who used other skills and experience to climb the management ladder.

To be a successful football manager, do you need to be a good player first? The answer is a categorical no. Playing does not necessarily give you a greater insight as to what happens on the pitch, that assumption is inaccurate. The measure of skill a footballer possesses has no correlation whatsoever as to what football management entails and in recent years the statistics tells us that, with one of two exceptions, most of those who have played at a high level are actually disadvantaged.

Technology and education dispel the myths and negate the importance of playing. Experience is valuable but the reality is that less successful players often make better managers. They seem to work harder and relate better to the less technically able.

Success in football management requires proficiency of a different kind yet there remains a certain amount of snobbery amongst existing players, former players, present managers and the media towards managers who did not play. A case in point is television pundit Steve Claridge, who played for 15 clubs and has qualified as a coach. He (foolishly) said, that asking him to go on a FA coaching course was like asking 'Gordon Ramsay to make beans on toast'. The presumption is that players can become good coaches automatically. He is wrong of course- they cannot, and his coaching record is testament to that.

Ex-shoe salesman Arrigo Sacchi articulately reminds us that a jockey does not need to be born a horse to ride. He was the last coach to win back-to-back European Cups (AC Milan in 1989 and 1990) and some attribute the pressing game at the highest level (that Barcelona use with such success these days) to him.

Carlos Parreira (68) is diversely respected and just one of two coaches who has led five national teams to the World Cup. He did not play football, yet managed 25 teams and is a World Cup winner. Felipe Scolari was a World Cup winner in 2002 and a 2004 Euro finalist. He played for Caxias, Juventude, Novo Hamburgo and CSA: has anyone heard of any of those teams? Amongst those who are arguably the top four managers in the world presently in a job - namely, Jose Mourinho, Sir Alex Ferguson, Guus Hiddink and Josep Guardiola - only the latter excelled as a player prior to management!

Assimilating a collective, preparing a blend and nurturing a vision is something far removed from just playing. The ability to man-manage, empathise, understand human nature (including greed and limitations) is just the start. They must carry authority and assuredness, deal with directors, fans and the media with equal aplomb but most of all need to be able to resolve, teach and coach. It is the biggest job description of any sport and none of these attributes are necessary for a football player.

Mourinho and Guardiola have taken management a step further and have raised the 'attention to detail' bar. They understand its ephemeral nature and recognise the game is played off the pitch as well as on it and this is the new level that the new Chelsea boss Andres Villas-Boas must aspire to.

In regard to acceptance within the Stamford Bridge dressing room, non-player and new kid on the block Villas-Boas has the luxury of following in the footsteps of Mourinho and therefore can expect less resentment than would otherwise have been expected. Latest Betfair prices on him achieving success and winning the 2011/12 Premier League suggests he has work to do: Man Utd [2.44] Man City [3.2] Chelsea [5.8] Liverpool [15.0] Arsenal [28.0] Spurs [150.0] Bar [1000.0].

Welsh football to remain in freefall

Wales-based Paul Moon tells us why the future of Welsh football is bleak and not even the promotion of Cardiff or Swansea to the Premier League can save it....

Tottenham Hotspur: Who's the best partnership up front?

Few teams in the Premier League have experimented with more partnerships up front than Tottenham Hotspur this season. But which one has yielded the most goals and win ratio, asks Micahel Cox....

Ryan Giggs: The ultimate team man but not the greatest

Ryan Giggs has been around longer than the Premier League and won just about every club honour up for grabs. But where does he rank alongside the greatest United legends and where was the one area he let others down,...

Sorry there are no tips today - Please come back later.