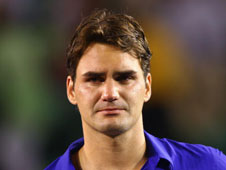 "Although there are those who feel Federer is now able to play better tennis than ever – and his semi-final win against Djokovic in this year’s French Open was about the best I’ve seen him play – there’s no doubt that he’s less dominant, even fragile at times."

What can the record of other greats tell us about Federer's chances of adding to his title haul in the US Open? A great deal, writes Jack Houghton.

All week I've been dreaming about intersecting lines, of varying colours, and of what they can tell us about Federer's chances of winning his sixth title at Flushing Meadows. In each dream, Federer is playing sublimely, only to be felled at a crucial moment by a dipping, arced line, which descends from the heavens to crush his title hopes.

Perhaps I should explain.

I've always been fascinated by the rise and fall of great sporting icons: the physical and mental capabilities that catapult them to greatness; the way in which they dominate their rivals when at their peak; and how they deal with, and manage, their decline. In fact, it's that last bit - their slide from greatness - that I find most absorbing, because it is these characters, who are least equipped to deal with failure, that have to face up to it most starkly, under full public scrutiny.

The decline from greatness is, however, generally misunderstood. Commentators are always looking for turning points where dominance immediately ceases, for moments that can be definitively labelled "the end". When Federer first lost to Nadal in a Wimbledon final, in 2008, there were plenty who seemed to think he was finished. Whilst that final might have been evidence of a tipping point for Federer's opponents - where his gradual decline meant others, on their day, could now beat him - it did not mean he was no longer able to win tournaments. His four subsequent Grand Slam victories provided ample evidence of that.

However, although there are those who feel Federer is now able to play better tennis than ever - and his semi-final win against Djokovic in this year's French Open was about the best I've seen him play - there's no doubt that he's less dominant, even fragile at times, evidenced by his loss to Tsonga at Wimbledon this year, from two sets up. To try and understand Federer's decline, I thought I'd see how his career arc compares to other great tennis players from the past.

To do this, I looked at the top 11 players, in terms of who had won the most career titles. I picked 11, because I wanted to include Rod Laver, who falls down the list because much of his early career was before the open era. I then charted those career titles according to how many each player won in each season of their career, starting with the season in which they won their first title. I then graphed the data for each player, to see how quickly they rose to dominance, how long they were able to sustain that dominance, and how quickly they declined.

Other greats started winning prevalently earlier in their career. McEnroe, Borg, Lendl and Connors didn't seem to require the time to ramp up, with them all winning at least five titles in the first year they won anything, and all of them posting a big number of titles within two or three years. With the exception of Borg though (whose sudden retirement shocked the tennis world) the tails of their careers look remarkably similar to the bell-curvers: three or four seasons of gradual decline, followed by retirement.

Two players who are harder to chart are Becker and Agassi. Their graphs are much flatter, with peaks and troughs along the way, but with neither of them reaching the big numbers of the others in the list.

So where does Federer place in all this? Well, so far, his career titles by year read like a near perfect bell-curve: 1, 3, 7, 11, 11, 12, 8, 4, 4, 5, and 1 so far this year. Those last four years especially look remarkably similar to the end of the careers of those players mentioned above. But who's to say it's all over for him? Who's to say he can't have a late, Agassi-like career resurgence, further cementing his position as one of the all-time greats? Part of me hopes he can, although it would rather spoil the shape of the graph I've been dreaming about if he does.