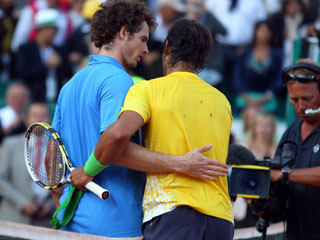 "But he does tend to come good against the better players and while I’m
not convinced that he will be aggressive enough throughout to knock
Rafa off his perch, I do fancy the Scot to win with a 6.5 game head start on the handicap at [2.0]."

Rafael Nadal looked like being back to something like his best against Robin Soderling but Andy Murray has been known to raise his game when up against the big guns and will make Nadal sweat for the inevitable win, says Sean Calvert.

Day 13 at the 2011 French Open features the men's semi finals and we have the best four male players on the planet facing off for a place in the final.

I've already nailed my colours firmly to the Novak Djokovic mast against Roger Federer, but what of the other semi that features Andy Murray and Rafa Nadal?

I went out on a limb in backing Robin Soderling against Rafa in the quarters, only to be greeted with an insipid effort from the Swede, who only started playing in the third set, once the match was lost.

When Soderling did find his range, he took Rafa to a breaker and although the Spaniard's was a much improved effort on his previous rounds, I still don't think he's at his best, which gives Murray a squeak here.

Murray's has been an eventful journey to the last four, with his ankle injury and last-gasp comeback against Viktor Troicki - and he even made his supporters suffer against Juan Ignacio Chela on Wednesday.

But he does tend to come good against the better players and while I'm not convinced that he will be aggressive enough throughout to knock Rafa off his perch, I do fancy the Scot to win with a 6.5 game head start on the handicap at [2.0].

With no pressure on him whatsoever, he can swing freely and have a go at Nadal. Nine of their last 10 meetings have been close (10-5 head-to-head, Nadal), so I don't think Rafa will find this as easy as his quarter final.

The Spaniard is no value at [1.19], but Murray may not trade any lower than the [6.2] currently on offer during the match, so I don't fancy an outright bet.

If Murray can serve well and get his backhand down the line working at it's peak, he can cause Nadal problems on this surface, as we saw in Monte-Carlo recently, and he won't give Rafa anywhere near as many unforced errors as Soderling did on Wednesday.

Rafa will probably come through in four sets, which is tempting at around [3.7], but Murray definitely has a shot and this could be closer than the odds suggest.