French Open Tips: Has Murray reached the end of the line? 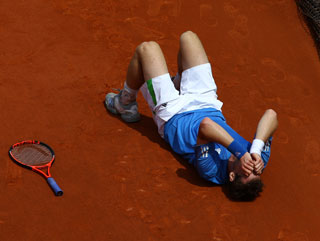 Andy Murray lies on the floor after spraining his ankle - will the injury stop him today?

"I can’t see Murray being anywhere close to 100 per cent fit though and surely it would be unwise to get involved in the [1.46] about him winning this against an improving opponent."

Would you take odds-on about an injured Andy Murray progressing at the French Open today? Sean Calvert isn't!

Day nine at Roland Garros sees the conclusion of the men's and women's fourth round matches and the big question for British fans is 'will Andy Murray be fit to play?'

Murray's sprained ankle will be given as long as possible to heal before a late decision on his participation in his clash with Viktor Troicki, who himself has been reportedly under the weather this week.

You would fancy the Scot strongly for this, if fit, as he has a perfect 3-0 record against Troicki and he has never been close to dropping a set against the Serb in their series thus far.

But I can't see Murray being anywhere close to 100 per cent fit though and surely it would be unwise to get involved in the [1.46] about him winning this against an improving opponent, who recorded a fine win over the dangerous Alexandr Dolgopolov in the previous round.

It's worth remembering also that the Scot was far from impressive prior to his ankle injury, so it's worth taking the [3.05] about a Troicki win with Murray unlikely to be able to complete the match.

Bets will of course be paid out if one set is completed and with the Scot severely hampered by injury, the price on the Serb looks too good to miss.

On the women's side today, tournament favourite Victoria Azarenka seems to me to be awfully skinny at around [1.18] to defeat Ekaterina Makarova in the match immediately prior to Murray's on Court Suzanne Lenglen.

The pair have met three times over the last 12 months, with Vika leading 2-1, but of the seven sets they've played, it's only 4-3 to the heavy favourite, who has been known to be vulnerable to left-handers before.

Indeed, Azarenka's last defeat in a completed match was to a leftie and I don't think this will be quite as straightforward as the odds suggest.

Makarova might not be quite classy enough to take the win today, but in a tournament of shocks on the women's side, she looks likely to make things tough and with a 6.5 game head start on the handicap at around [1.9], the Russian has to be value.

This pair haven't played on clay before, but I'd be surprised if Vika won this by as comfortable a margin as the handicap mark.