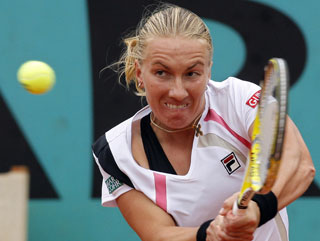 Svetlana Kuznetzova for the semi-finals?

"Sveta will have to defeat the crowd as well as her French opponent, but the Russian has seen it all before here and her vast experience of being in the latter stages at Roland Garros will stand her in good stead today."

Day 10 at Roland Garros 2011 sees the first of the men's and women's quarter-finals take place, but Fabio Fognini's somewhat bizarre withdrawal means that Novak Djokovic received a bye through to the semi finals and has an extra day off.

So, today I'm concentrating on the women's singles and the best bet of the day has to be Svetlana Kuznetsova to beat Marion Bartoli at around [1.45].

Sveta will have to defeat the crowd as well as her French opponent, but the Russian has seen it all before here and her vast experience of being in the latter stages at Roland Garros will stand her in good stead today.

Bartoli, despite looking as physically fit as I can recall seeing her, is not a great mover, which goes some way to explaining her poor results here and on the red dirt generally.

The French player has reached only one final on clay in her entire career - last week in Strasbourg - and enters the last eight at her home Slam for the first time ever.

Kuznetsova on the other hand is very much at home on clay, with three titles on the dirt, including here in 2009 and despite enduring a poor year by her standards, she has looked good this fortnight, dropping just the one set so far.

Each of Bartoli's matches have gone the distance, with the exception of the retirement of Gisella Dulko, and she should find Sveta just too clever on this surface today.

The pair have met on three occasions in the past, with the Russian holding a 2-1 advantage, and all three meetings have taken place on Bartoli's favoured hard-courts, but they haven't played each other for over 12 months now.

The top half of the women's draw is wide open with defending champion, Francesca Schiavone, perhaps the favourite to come through that section, but Sveta will definitely fancy her chances of making her third final here and I expect her to brush Bartoli aside today, possibly in straight sets.

Recommended Bet
Back Kuznetsova to beat Bartoli at [1.45]