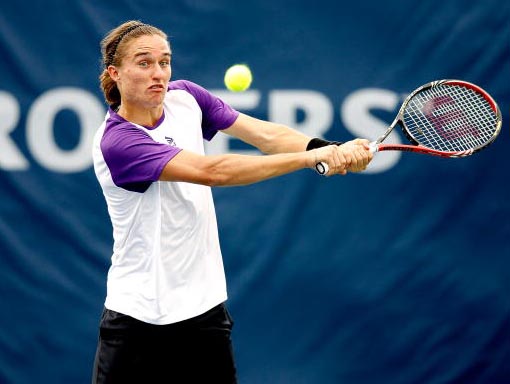 "At 23 years-old, the pony-tailed assassin has so far enjoyed an easy route into the third round without dropping a set. He is akin to winning when priced as a favourite, having won nine of his last 10 matches from that position. He also enjoys the five set format, having won six of his last seven best-of-five set matches."

Ahead of Saturday's action Ben is siding with a pony-tailed youngster in the men's draw and the Dutch teenager who caused one of the biggest upsets of the tournament so far in the women's. Read on to find out who his money is on.

Although, Serbian Viktor Troicki has a 2-0 head-to-head advantage coming into this match, my money is firmly on the Ukrainian No. 1. He's a player I believe is far better suited to the Parisian red brick dust than Serbia Davis Cup champion, Viktor Troicki.

On his day, the temperamental Dolgopolov can pose a real threat to any of the top players in the world. With his flamboyant, unorthodox style of play he is able to mix it up from the back of the court hitting deadly drop shots whilst at the same time relying on his strange looking (but effective) serve to win himself cheap points.

At 23 years-old, the pony-tailed assassin has so far enjoyed an easy route into the third round without dropping a set. He is akin to winning when priced as a favourite, having won nine of his last 10 matches from that position. He also enjoys the five set format, having won six of his last seven best-of-five set matches.

Dolgopolov, who was ranked outside of the top 100 at the start of 2010 has made massive strides to reach an all time high of 20 in the world this month. So far on the dirt, he has reached two semi-finals (Acapulco and Nice) defeating decent players en route, such as Stanislas Wawrinka and David Ferrer. With a Grand Slam quarterfinal appearance already under his belt for this year (Australian Open) the Ukrainian will surely fancy his chances to get through round three before a potential meeting with Andy Murray in the next lies in wait. My money is on him doing just that.

Dutch teen sensation, Arantxa Rus sent world number two and multi Grand Slam winner Kim Clijsters packing on Thursday thanks to a resolute performance that saw the 21 year old left-hander claw her way back from a set and 5-2 down.

Having backed Rus in-play against Clijsters, I'd be a fool not to champion this young lady to make it two big wins in a row and reach the fourth round of a Grand Slam event for the first time in her fledging career.

Maria Kirilenko is the player faced with stopping Arantxa Rus in her tracks; the formidable Russian, who has so far had a relatively easy opening two rounds, is yet to be tested but will no doubt be slightly worried about playing her younger opponent for the very first time.

Rus has won six of her last seven matches on clay and the same at Grand Slam level ; she managed to take Maria Sharapova to three sets in Madrid earlier in the month and also reached the final of a recent ITF clay court tournament.