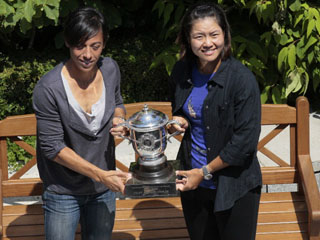 Sean says: back the one on the right.

"But it’s asking a lot for Na to cope with the wind, outwit a clay-court specialist, and handle the pressure of a Slam final all at once, so I’m slightly surprised that she’s marginal favourite."

Francesca Schiavone v Li Na wouldn't have been many people's idea of the Women's final at the off but they've both been highly impressive in their own ways. One of the two has done it all before at Roland Garros and she's the one we have to back, says Sean Calvert.

Saturday at Roland Garros sees the women's final take place and there are plenty of records set to fall to whoever takes the title.

Francesca Schiavone will become only the second woman to retain the French Open singles crown since 1996, should she be successful, while Li Na will become the first Asian to lift a Grand Slam title.

The layers have this one more or less even, with the Chinese player available to back at around [1.88] and the Italian at around [2.12] and it is a tough match to call.

They have played each other on four occasions, with their series tied at 2-2, and the one meeting they've had on the red dirt came at Roland Garros last year, with Schiavone an easy winner.

Li Na has improved immensely since then, but I believe that Schiavone's all-court game, variety of shot, and ability to handle the probable testing conditions will see her come out on top.

Na has been very impressive in this tournament so far, dropping just two sets en route to the championship match, but her shot-making game is going to have to be firing on all cylinders to get past the wily Italian.

With all the talk being about the young guns, such as Wozniacki, Azarenka et al, it's refreshing to see two relative veterans, at 29 and 30 years old respectively, battling it out in the final.

Na's improvement since their match here last year and the addition of the quicker Babolat balls should make this a much closer encounter than the 6-4, 6-2 win for Schiavone that incidentally, the Chinese was favourite for.

But it's asking a lot for Na to cope with the wind, outwit a clay-court specialist, and handle the pressure of a Slam final all at once, so I'm slightly surprised that she's marginal favourite.

That shouldn't bother Schiavone though, who won the title last year as a big outsider over Sam Stosur. Expect her classical clay-court game, with it's slices, dinks and drop shots to eventually overcome Li's clean hitting on the day.

Recommended bet:
Back Schiavone to beat Li Na at around [2.12]