French Open Men's Final Tips: The pick of the side bets 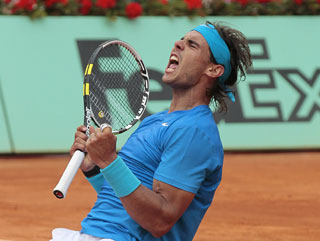 Nadal may well celebrate victory at the end of Sunday's final but Federer will definitely out ace him, oh yes...

"It looks to me as if the market overestimates Nadal's chance of a straight-set win. In 15 matches on clay against his great rival, Federer has managed to win at least one set on nine occasions."

Most aces, set betting and tie breaks - there's plenty of side markets to bet on with Betfair. Jack Houghton has rifled through the stats to bring you a few of the best wagers to be had from Sunday's Nadal v Federer showdown

Having tipped Roger Federer [19.0] and Murray [26.0] as the value alternatives to Djokovic in this year's French Open, there's a certain all-green smugness pervading the Houghton household this morning. Trading out of positions has never been a strength of mine and yet, remarkably, I decided to take my money and run on Murray prior to his semi-final loss to Nadal, laying him for a little more than I had originally staked prior to the tournament.

And, this morning, I've done the same with my bet on Federer. As much as I'd love to see him beat Nadal - and believe he can - [3.1] looks a little on the short side, so I'd rather guarantee a healthy profit in the outright market and search out a bit of value elsewhere.

Most Aces
It's unusual for that value to come courtesy of a [1.08] shot, but in the market for who will serve the most aces in Sunday's final, layers seem to be feeling over-generous in only giving Federer a 93 per cent chance of out-acing Nadal. What's more, in a market that is still fairly illiquid, it's likely layers will get a little more generous still as the final approaches.

But here's why they shouldn't. In 23 of the 24 matches they have contested, Federer has served more aces than Nadal. On all surfaces, Federer serves an average of four aces for every one Nadal manages. And although clay courts dampen Federer's serve to some extent, that ratio only drops to three-to-one in the 13 matches they have contested on clay.

The one match that will give layers hope is the last time the two players met. Their semi-final at the Madrid Open saw only one ace - served by Nadal. But that game was unusual: Federer managed to win the first set despite not serving especially well, and only managed to win four games thereafter. What's more, Federer seems to be discovering a new zip on his serve with the new, faster balls that are being used for the first time at this French Open, evidenced by the 18 aces he put past Djokovic on Friday.

Perhaps ironically, Nadal is the face of an advertising campaign for Babolat, who supply the controversial new balls, and yet it is the switch from the slower Dunlop balls of French Opens past that give Federer a real chance of beating Nadal.

Okay, it's no way to get rich, but if you can get [1.1] on Federer serving the most aces, it offers a much better risk-reward ratio than your average Icelandic bank.

Set Betting
With Nadal holding a 13-match-to-two advantage over Federer on clay, it is no surprise that the Spaniard holds sway in the Match Odds and Set Betting markets. However, it looks to me as if the market overestimates Nadal's chance of a straight-set win. In those 15 matches, Federer has managed to win at least one set on nine occasions. That statistic translates almost perfectly into the [3.35] offered on a 3-0 score in favour of Nadal. However, it does not take account of the Babolat balls, or that Federer has seemed to play the better tennis throughout the fortnight at Roland Garros.

Most appealing in this market is the [8.6] available on Federer winning the match in five sets. Accepted wisdom seems to be that Federer is less good the longer a match progresses. And this seems to be borne out by the stats - Federer has only won 56 per cent of his career five-set matches, compared to Nadal's 82 per cent. But their head-to-head record in five set matches is close, with Nadal just holding sway three-to-two.

Tie Break
With these two playing a tie break an average of once in every eight sets played - whether on clay or any other surface - it would be fair to assume there is about a 50 per cent chance of them doing so on Sunday. The market offers no real value on this front then, so I'll be staying out of this market, but looking to support Federer in any tie break they do play - he has just held the advantage in tie breaks between the two in the past.