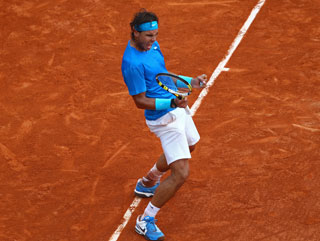 Rafael Nadal once again got the better of Roger Federer in a Grand Slam final, winning the French Open in four sets today.

The Spaniard now has 10 wins in Grand Slams, six of those coming at Roland Garros, a record that equals Bjorn Borg's haul at the clay tournament.

Nadal was backed at a high of [3.65] in Betfair's tournament winner market during a campaign that contained far more wobbles than usual, including a flirt with first round disaster when taken to five sets by giant American John Isner. That, coupled with Novak Djokovic's seemingly unstoppable rise, made it seem as if the King of Clay might finally lose his crown.

But Djokovic did not make it past Federer in their semi and Nadal had few problems getting past his great adversary, trailing heavily in the first set before rallying and losing the third set 7-5 but otherwise sailing to his record breaking sixth win.