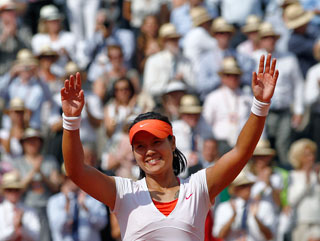 Seeded sixth to win the title, Li Na overcame some shaky moments in the second set to force a tie-break against the 2010 champion. But the Chinese right-hander didn't drop a single point as she went on to claim the crown to defeat an opponent who had beaten her last at Roland Garros year.

Wimbledon starts in just a few week and Li Na can be backed at [10.0] to win the only grass court major.