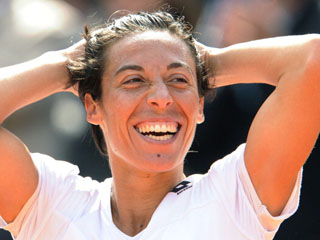 Schiavone has the experience, belief and know-how to successfully defend her crown.

"Put simply, it remains questionable whether the younger players on the WTA are ready to win a Grand Slam title, to seize the opportunity that these open draws represent. Plenty of those looking to make their major breakthrough have already fallen by the wayside."

The top seeded female players have been crashing out on a daily basis and with just four days to go, it's still wide open. Why is this the most open Slam we can remember, asks Guy McCrea.

Trying to predict who might win this year's French Open women's title has been - and still is - a very tricky exercise. None of the top three seeds even made the quarter finals. But with so many upsets, a wonderful opportunity knocks for those still involved at this late stage of the event.

Why has this year been so open? Well, there are at least two key factors. The first is the absence (or early exit) of the major players of recent years in the women's game. The Williams sisters have only won the French Open singles crown once between them (Serena's success over Venus back in 2002) but their mere presence in Grand Slam draws changes perceptions and makes fellow competitors seriously doubt their own prospects of going all the way.

Justine Henin's second retirement from the sport has also clearly left a huge hole, most of all on the clay where the Belgian dominated with her all-round skills. Henin won the French Open title four times in five years between 2003 and 2007. Her compatriot Kim Clijsters is still involved and entered the draw this time, with many observers thinking that she should be the favourite. After all, Clijsters had won the last two Grand Slams - in New York and Melbourne. But for me, it was naïve to expect Clijsters to win the French having been out with an ankle injury since the end of March. With no clay court matches under her belt ahead of Roland Garros, Clijsters was vulnerable to an early exit and so it proved as she suffered a second round upset at the hands of Dutch youngster Aranxta Rus.

Together, the Williams sisters, Henin and Clijsters have won 13 of the last 17 major women's titles between them. That's a huge amount of Grand Slam winning know-how to take out of the mix. In their absence, those still left in the women's draw are mainly made up of unproven talents, save for defending French Open champion Francesca Schiavone ([4.5] to retain her title) and three-time Grand Slam titlist Maria Sharapova ([4.3 ]to win.her first French Open title)

Put simply, it remains questionable whether the younger players on the WTA are ready to win a Grand Slam title, to seize the opportunity that these open draws represent. Plenty of those looking to make their major breakthrough have already fallen by the wayside. I tipped Petra Kvitova for a maiden major title this year (possibly at the French, more likely at Wimbledon) but just when the Czech looked primed to take advantage, she threw in a mediocre serving effort against China's Li Na ([14.0]to win) in their fourth round clash and crashed out.

A round earlier, top seed Caroline Wozniacki looked well short of her usual energy as she meekly exited to Daniela Hantuchova. Like Kvitova, the Dane is yet to crack the conundrum of winning seven straight matches at a major. Those same old - legitimate - questions surrounding Wozniacki's worthiness as world number one without a major title still abound too.

Fourth seed Victoria Azarenka ([3.05] favourite to win) has impressively reached the French Open quarter finals without dropping a set. But is the Belarusian mentally ready to win a Grand Slam title either? Will she be able to pull through if she is pushed harder and asked more questions by tougher opponents during the final rounds? That ability to 'problem solve' alone, without help from a coach, and win at the Slams without being at your best is a quality that she, Kvitova and Wozniacki have still to consistently prove they possess.

All the contenders left at this stage are striking the ball well. They wouldn't have reached the second week if that weren't the case. What becomes most important is how much mental strength they have, how much they really want to win a major title. It is primarily why I tend to favour Schiavone or Sharapova to win Roland Garros from those left in the tournament. Both have won majors before and even more importantly - both have demonstrated that ability to fight, think and scrap their way to the win on court even when they are not at their best. Schiavone's quarter final win over Anastasia Pavlyuchenkova and Sharapova's second round comeback against French prodigy Caroline Garcia are prime examples.

More important than hitting crunching groundstrokes or smashing huge serves, something that can't be taught - mental strength - will be paramount as we approach this crucial weekend in Paris.