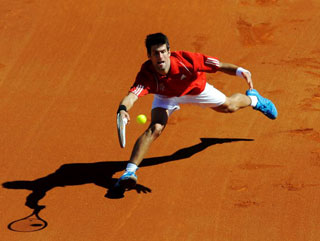 Djokovic has been playing unreal tennis all year

"The Djokovic game appears to have no weaknesses right now, while Federer appears only to be able to play his best in patches these days and that won’t be good enough if Djoker plays as he has this year."

There's no arguing Roger Federer has been in fine form as he's negotiated his way to the semis but the 'Serbinator' Novak Djokovic is different gravy to anything he's faced so far. We have to side with the Australian Open Champion to win in four, says Sean Calvert.

Day 12 at Roland Garros sees the first of the semi final matches take place and the eagerly anticipated clash between Novak Djokovic and Roger Federer is the highlight of the day.

Hopefully this match won't be too badly affected by the swirling winds that have blighted several matches at this year's French Open and we'll get the spectacle that we all want to see.

Nole should be in perfect shape for this, having had a few days off due to Fabio Fognini's withdrawal. And if he continues the way he's been performing lately I don't see any way that Federer can win this match.

Most observers are falling over themselves to tell us how well Fed is playing in this tournament, but it must be said that he has only faced players against whom he has a massive psychological advantage.

The likes of Feliciano Lopez, Janko Tipsarevic, Stan Wawrinka and Gael Monfils, while good players, all bottle it when facing Fed, but the advantage will be the
other way today, with Djokovic having won his last three against the Swiss and playing off-the-charts tennis.

They haven't met on clay since Rome 2009, which Djokovic won, and only three times in total (2-1 Federer head-to-head), but these comparisons are largely irrelevant, as both players' games have changed a lot since those matches were played.

The Djokovic game appears to have no weaknesses right now, while Federer appears only to be able to play his best in patches these days and that won't be good enough if the Serb plays as he has so far this year.

If the Swiss does proceed to his fifth French Open final and go on to win it, it will surely rank up there with the very best achievements in his career. But I don't see it happening and Nole should take it in three or four sets, with the [3.85] about a 3-1 win the best bet in this one.

On the women's side of things, home favourite, Marion Bartoli takes on defending champion, Francesca Schiavone and surely this is the end of the road for the home hope. But I don't think she'll go quietly, having come this far.

Bartoli was really pumped up against Sveta Kuznetsova in the last round and that passion alone should ensure that this clash with Schiavone at least goes to a decider.

The pair have met five times in the past, but never on clay and not for two years, but the Italian holds a 4-1 head-to-head lead.

Four of those five games have gone to a deciding set and I envisage this one going the same way. Schiavone has needed three sets in both of her last two matches this week and a retirement the round before that.

I fancy Schiavone to come through eventually, but not strongly enough to take the [1.55] on offer, so I think the best bet in this one is to back three sets at around [2.76].