French Open Tips: Rafa to be put to the sword 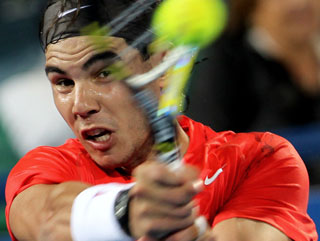 "Of course, this match against the only man to have beaten him at Roland Garros might well spark him into life, but at [1.38] for the Rafa win, I’m siding with the Swede instead at [3.65]."

He's up against the last man to beat him at Roland Garros and he looks exhausted and shaken. We just have to take on Rafael Nadal when he plays Robin Soderling, says Sean Calvert.

There's an outstanding line-up on Day 11 at Roland Garros, with the highlight surely being another clash between Rafa Nadal and Robin Soderling.

And from a betting perspective it simply has to be worth taking a chance on the Swede to repeat his famous win over the Spaniard of a couple of years ago.

Nadal admitted after his laboured win over Ivan Ljubicic that he's not playing well enough to win this title and he's certainly got that right.

The man looks exhausted, lacking in his customary passion and his serve and groundstrokes are without their usual power and precision.

Of course, this match against the only man to have beaten him at Roland Garros might well spark him into life, but at [1.38] for the Rafa win, I'm siding with the Swede instead at [3.65].

You wouldn't get anything like [1.38] about a fit and firing Nadal at Roland Garros and Soderling has been impressive enough so far in this tournament to suggest that he has a real shot of inflicting another defeat on Nadal.

The Spaniard's confidence looks shot by his recent losses to Novak Djokovic and Soderling will be up for this in a way that for some inexplicable reason, Ljubicic wasn't.

In the women's draw, both quarter finals look really tight to me, with both underdogs, Andrea Petkovic and Li Na, in with chances of causing upsets against Maria Sharapova and Vika Azarenka respectively.

I'm going to go for the value again though and at [3.55] Li Na looks a great bet to inflict her fourth victory in five matches over Azarenka.

I think the layers are over-estimating Vika in this tournament, bearing in mind she's never been past the quarters here and has only one clay court title to her name in her career.

Despite the fact that she hasn't lost a set so far in the tournament, her draw has been easy and her serving was poor against Makarova yesterday, who should have run Vika much closer than she did.

I expected Kvitova to beat Li Na in the last round, but with that hurdle overcome, I don't see any reason why the Chinese player can't continue her good record against the Belarusian.

They've played four times in the last three years - all on hard-courts, with Li Na winning three of those, so this isn't a match-up that Vika will fancy.

That tough encounter with Kvitova should have Li Na at the right level
or this, whereas Azarenka's soft early opponents might cost her.