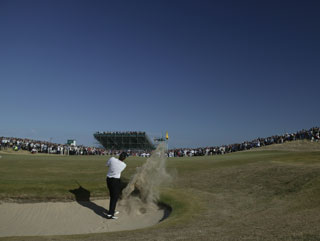 "Backing the leading bunch may seem like poor value, but it doesn't always mean taking short prices. Despite his close proxomity to the lead, Curtis begun the final round in 2003 trading around [50.0]."

Watch the weather
Nobody watching golf recently should need reminding that the most elementary rule of successful in-play betting is to keep a very close eye on the weather forecast. That basic principle particularly applies to links layouts, where wind is always the course's main line of defence. The best illustration of how a links course can play so differently from one day to the next can be seen in Rory McIlroy's first two rounds in last year's Open. In ideal conditions on the opening morning at St Andrews, Rory took the course apart with a memorable 63. The next day amidst fierce winds, he shot 80.

Rain is also a significant factor. While playing during heavy rainfall is awkward, increasing the premium on finding the fairway, any softening of the greens can take the sting out of an otherwise tough course. This was very much the case at last month's US Open, and would again be pivotal around Royal St George's, where the firmness of the greens is a key defence. The ideal time to be out on the course would be after rainfall, in light winds.

At this early stage, the long-distance forecast for Sandwich suggests an early tee-time on Thursday will offer an advantage, as strong winds build up through the afternoon. However, the forecast wind speed can change by the hour, so do monitor weather developments constantly throughout.

Don't expect massive turnarounds, and stick with those near the lead
Such is the nature of golf, there is always a temptation to lay the front-runners or take big prices about players coming from a long way back, in expectation of a dramatic turnaround. Much depends on the nature of the course though, as illustrated by two contrasting Open venues. The last two Opens to be played at Carnoustie have seen the winner come from ten and six shots back on the final day. Alternatively there are front-runners' courses like St Andrews, where Louis Oosthuizen became the eighth final day leader to deliver in 12 post-WW2 Opens.

Previous results at Royal St George's suggest it falls into the latter category. In 2003, Ben Curtis started the final day two shots back. In 1993, Greg Norman was more or less favourite throughout, having shared the lead after the first day. In 1985, Sandy Lyle was second after round one, held the halfway lead, before starting one shot back on Sunday. In 1981, Bill Rogers led from halfway.

Backing the leading bunch may seem like poor value, but it doesn't always mean taking short prices. Despite his close proxomity to the lead, Curtis begun the final round in 2003 trading around [50.0].

The best time to back players is between the 5th and 14th holes
Both the start and finish at Royal St George's are tough, with most of the red numbers coming in this middle stretch of ten holes. Three out of the first four holes will yield few birdies. The par-4 1st was very tough in 2003, and even after a widening of the fairway, represents a very tricky start. The 3rd is a 240 yard par-3, that ranked third hardest on the course in 2003, and has since been lengthened by 30 yards. Previously a par-five, the 4th is now a long, potentially brutal par-4.

Anyone negotiating that opening quartet in even par will be in excellent shape to attack several forthcoming risk-reward holes. Thanks to the bunkers and undulations, none are exactly free of hazards, but with the rough reportedly light we can expect to see plenty of birdies throughout this stretch. The par-fives are the 7th and 14th, with the former offering a particularly good opportunity.

After completing that second long hole at 14, par is a good score until the clubhouse. The 496 yard par-4 15th is one of the hardest four shot holes in golf. Penal bunkers pepper await marginally errant drives, and even those finding the fairway face a long second shot to one of the smaller greens. The par-3 16th is supposed to be relatively easy, but the greenside bunkers managed to derail Thomas Bjorn's bid last time. The 18th has been extensively changed since 2003, but will remain a tough finish, especially into the wind.

Back the clubhouse leaders
Considering all those above factors, it might pay to back players on the first page of the leaderboard, once they've finished their round. Unless conditions become dramatically easier later in the day, they should remain amongst our target group of players already in contention. At this point, all players out on the course will still have that tough finish to negotiate, and are therefore likelier to go backwards rather than forwards. Moreover, if conditions remain difficult until your player starts his next round, his position will probably improve as others struggle and fall away.