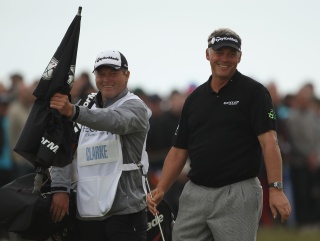 The build-up to the 2011 Open Championship was dominated by talk of a Northern Irish golfer and so it will be when we look back on the event after Darren Clarke won the Claret Jug by three shots.

At one point it looked as though Phil Mickelson might win his first Open as he set off playing blistering golf. However, Lefty blew his chance on the back nine with a series of bogeys and finished in joint second place at -2 alongside Dustin Johnson.

Clarke is a popular champion. Since he finished round one three shots off the lead on Thursday, British golf fans have been willing him to succeed. They cheered him around Royal St George's and he repaid them by keeping his nerve, taking the lead after round two and holding on to it with composed performances on Saturday and Sunday.

It's been a terrific four days of golf and the fact that only four players finished under par show what a tough Championship it has been. Nobody will deny that we have a worth winner and the Punter will be back to provide a comprehensive report in the morning on how his picks performed.