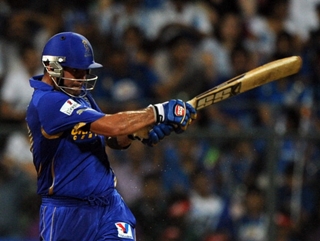 Owais is in blistering form for Rajasthan

"Owais Shah and Ajinkya Rahane are the men in form for Rajasthan, but the Englishman is better equipped to deal with Kolkata’s pace bowling."

Rajasthan shocked Kolkata last week but the Knight Riders have an excellent chance of exacting revenge on Friday, despite the best efforts of Owais Shah

Team News
Kolkata will probably want to stick with the winning formula they hit upon against Bangalore. That means Brendon McCullum will be on the bench again as Manvinder Bisla takes the wicket-keeping duties. Eoin Morgan hasn't played yet and could get a chance in the middle order at the expense of Ryan ten Doeschate.

Rajasthan may want to ring the changes after their defeat by Mumbai. They have Brad Hodge and Dinesh Chandimal available, but their batting has done well so far. Brad Hogg bowled well on his IPL debut last time but either he or Johan Botha could give way if the Royals want to add some pace to their attack in the form of Shaun Tait.

Venue and Conditions
Rain reduced the first match at Eden Gardens to 12 overs a side and there are thunderstorms predicted again ahead of Friday's contest. With all that moisture around, the surface should be lively and there will probably also be some variable bounce for the quicker bowlers to exploit.

Match Odds
Rajasthan have made a habit of confounding expectations and they won their first two games this season, thanks to some stirring performances from Owais Shah, Ajinkya Rahane and the cut-price Kevon Cooper. But both those games were at home and away from the low slow surface in Jaipur, their bowling, based entirely around medium pacers and spinners, could be vulnerable.

After a characteristically slow start, the Knight Riders began to look the part against Bangalore, due mainly to the bowling of Brett Lee, Jacques Kallis and Lakshmipathy Balaji. With Bisla batting well, they can afford to leave out McCullum and that middle order of Yusuf Pathan, Manoj Tiwary and Shakib al Hasan is packed with power.

On a surface that will enable their quick bowlers to trouble the Royals batsmen, Kolkata are fairly priced at [1.66] for revenge.

Top Kolkata Batsman
The big hitters Yusuf Pathan and Manoj Tiwary haven't got going yet, but on a tricky batting pitch I'm not sure they're reliable betting propositions. Better to stick with the classier performers and with Jacques Kallis yet to hit form, I'll be siding with Kolkata captain Gautam Gambhir at [3.5] or better

Top Rajasthan Batsman
Owais Shah and Ajinkya Rahane are the men in form for Rajasthan, but the Englishman is better equipped to deal with Kolkata's pace bowling and he will surely be retained in the top four after his brave effort against Mumbai. Shah should be backed at around [4.0]

Featured Market
There have been some low scores at Eden Gardens in previous IPL tournaments, a venue where Rajasthan were skittled out for 81 in 2011. This could be one of those occasions and it's worth siding with 'Under 68.5' in the Highest Individual Score market at [1.75] or better.

Recommended Bet
Back Owais Shah to top score for Rajasthan Royals at [4.0]