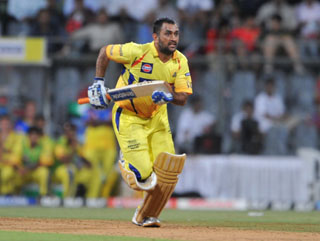 The one and only MS Dhoni

"We would like to trade Deccan in case they can exploit some nerves after the Super Kings’ opening loss but it needs to be north of 2.00"

Ed Hawkins reckons Chennai will get back to winning ways against Deccan. Read the preview and stats package now.

Deccan
Deccan, who finished seventh last year after failing to build on a semi-final outing in 2010, are waiting for big names to arrive. Kumar Sangakkara is with Sri Lanka and Darren Bravo has been picked for the West Indies Test squad to face Australia. They have also lost Ishant Sharma to injury while Pragyan Ojha, who was their leading bowler with 62 wickets in four seasons, has transferred to Mumbai.

Chennai
The champions looked anything but in their opening match when they were hammered by Mumbai. Bowled out for 112 with only two players scoring more than ten, they lost by eight wickets inside 17 overs. It is one of those inexplicable IPL results. How does a top order of Du Plessis, Vijay, Raina, Bravo, Morkel, Badrinath and Dhoni get blown away?

Venue and conditions
A good batting wicket for Deccan to launch their campaign on. The ACA-VDCA Stadium has not hosted an IPL match before and it has staged only one one-day international. More than 650 runs were scored when India and Pakistan met in 2005.

Match Odds
Chennai are [1.53] to win this one and although they should win comfortably against a weakened Deccan outfit, the price is too skinny. We would like to trade Deccan, who are [1.83] in case they can exploit some nerves after the Super Kings' opening loss but it needs to be north of [2.00].

Team Deccan batsman market
Michael Lumb, the former England T20 player, might get a go here. If he opens he will be around [4.50]

Team Chennai batsman markets
Suresh Raina is Mr Reliable in this format and is always a decent price because he doesn't open. If you can get [4.50] take it.

Any other featured market
Highest individual score is set at over-under 68.5. That might be worth going over with the reputation of this track.

Other recommended bet
Back-to-lay Deccan at more than [2.00].