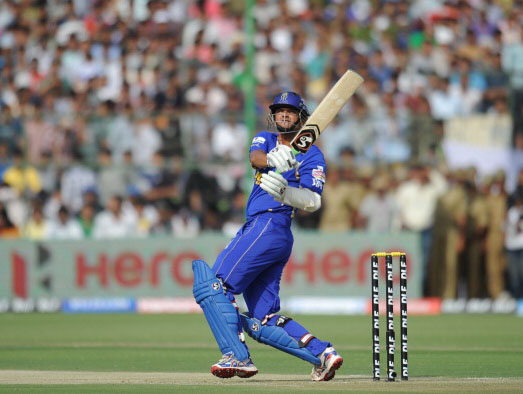 "What on earth was Daniel Vettori up to when handing the ball to part-timer Kohli for the penultimate over?"

Ed Hawkins, the Betting Writer of the Year, previews the contest from the Chinnaswamy Stadium

Bangalore have made an odd start to this season's IPL. They have, at times, looked the most powerful unit in the competition but have won only one from three. Last time out against Chennai Super Kings they posted a whopping 205 for eight but still lost. Their top order fired but no-one from No 4 down made double figures so there is a hint of complacency in this camp.

Rajasthan had started well to belie their unfashionable status but they were pegged back in defeat by Kolkata on Friday. They could not post more than 131 on a slow surface and they may lack a power hitter lower down. Rahul Dravid, Owais Shah and Brad Hodge are experienced campaigners, however.

A decent batting wicket in Bangalore. There have been two matches so far and Kolkata Knight Riders and RCB have posted healthy first digs of 165 and 157 respectively. Indeed, in the Champions League tournament played in October, four matches were hosted at the Chinnaswamy Stadium and they produced first-innings totals of 172, 169, 206, 214 and 203.

It will take a leap of faith to back Bangalore after their lasting outing. Not because they let such a huge first-innings target slip, but in the manner which they lost. What on earth was Daniel Vettori up to when handing the ball to part-timer Kohli for the penultimate over? It was promptly despatched for 28. He messed up his bowling options and needs to be smarter. Rajasthan are [2.48]. One to trade, for sure.

There is little point looking outside the Bangalore top four because the rest may rarely get a bat in this competition. Chris Gayle (194 strike rate), Mayank Agarwal (173) and Virat Kohli (123) all fired against Chennai which meant that AB De Villiers didn't have to. Gayle will be hot favourite at around [3.50].

Anjinkya Rahane is the Royals' top runscorer so far with 157 runs. He holds up well in the betting at around [4.00] with Dravid the favourite. Dravid has 85 runs from four innings.