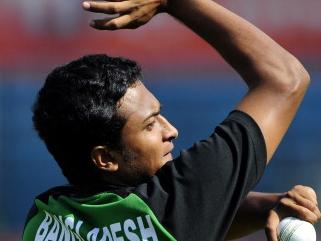 Shakib has come into the KKr side

The Indians face an anxious wait to see if they must win this contest on Sunday. If they do, Ed Hawkins says they are worth following

Mumbai
Mumbai have lost their last three matches. Why? Because they rely too heavily on Sachin Tendulkar. By his high standards he failed in each of those games, scoring 31 off 35 balls, 37 off 42 (both too slow) and six. Rohit Sharma, with 58 in defeat by Rajasthan last time, is finding some form.

Kolkata
There is no Eoin Morgan, who is in England trying to revive his Test career. If he is not selected for the Test squad to play Sri Lanka he will fly back, although not in time for this game. Certainly England fans, not to mention selectors, are likely to question his commitment to the cause. In his absence Ryan Ten Doeschate and Shakib-al-Hasan have come into the side. Shakib, with his canny spin, looks a better replacement.

Match odds
Mumbai were hoping Deccan could do them a favour by beating Punjab on Saturday. If not, Mumbai will need to win this game to stand any chance of making the finals. And by a big margin, too. If it transpires that the Indians must win, they make betting sense at [1.72]. KKR, who have nothing to play for having guaranteed their spot, are [2.22].

Top Mumbai batsman
Tendulkar, of course, enjoys favourite status. But he has not been at his most fluent in recent games and Sharma could be the man to follow. He has 349 runs in the series at an average of 43 but he is striking at 127, quicker than Tendulkar (107).