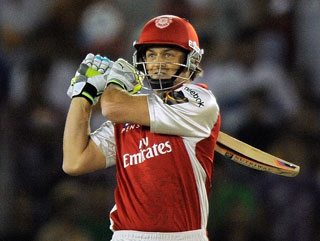 Kolkata are in decent shape following a narrow victory over Rajasthan Royals. It was their second victory from four. Shakib-al-Hasan, the Bangladesh all-rounder, is a key man for them and could be one of the players of the tournament.

King's have been boosted by the news that Azhar Mahmood, the former Pakistan all-rounder, has been granted a visa to play in the IPL but he won't be available for this match. Mahmood will only be allowed to play for five games in Chandigarh, at their home ground in Mohali, and one match against Delhi Daredevils in Delhi.

However, they have definitely lost the services of Stuart Broad who has been ruled out of the tournament with an ankle injury. They have signed Kyle Abbott, the South African, and Ben Cutting, from Australia, as replacements.

The Eden Gardens wicket looked sluggish to bat on in Friday's match between KKR and the Rajasthan Royals. The Royals could manage only 131, this despite losing five wickets with decent partnerships. It didn't look easy when KKR made 97 in a 12-over game against Delhi Daredevils, either.

King's XI have lost two of their three matches so far and it is not hard to see why. They are paupers in terms of ability in this IPL and will remain so. They are a collection of , admittedly once effective, old timers ranging from Adam Gilchrist to Dimitri Mascarenhas to Romesh Powar. They do not inspire. They should be taken on with KKR a decent value option at [1.67].

Jacques Kallis top scored with 31 against Rajasthan and he forms a formidable opening partnership with Gautam Gambhir. They could both be around [3.75].


Top King's XI batsman Shaun Marsh, who made his name in IPL1, is their top runscorer with 71 runs in two innings. It is a straight choice between him and David Hussey for honours. Hussey is yet to find form, however.

Featured market With a slow wicket and a slow-witted King's batting line-up, it could be wise to go under 150 runs for this one.