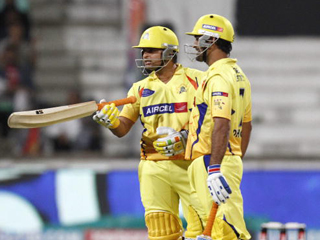 "With the toss bias in mind, it is obvious that the outsiders in this game are the value. Oddly, the outsiders are Chennai at 2.00."

The first match of the 2012 edition sees defending champions Chennai host the ever-fancied Mumbai Indians, now led by Harbhajan Singh, Both teams look very strong but the key to this match is the toss, says Ed Hawkins.

With a record of runners-up, semi-finalists, champions, champions in the four editions of IPL, Chennai are the team to beat. In a format with a reputation for unpredictability, their dominance is extraordinary.

MS Dhoni and Suresh Raina are the key men and they are in place once more for a tantalising opener against the Mumbai Indians. Dhoni has missed only three matches in IPL history and Raina is an ever-present.

Chennai will be without Ben Hilfenhaus and Michael Hussey who are on Australia duty. Ravi Jadeja, who Chennai spent their entire purse on in the auction, is an adequate replacement as an all-action all-rounder.

Early turmoil for Mumbai, who are yet to win an IPL. Sachin Tendulkar has stepped down as captain and will hand over to Harbhajan Singh. Harbhajan led Mumbai to Champions League glory last season when Tendulkar was unavailable.

Otherwise Mumbai are settled. They will be able to call on their entire squad throughout their campaign as none of their players have international commitments. This includes Kieron Pollard and Lasith Malinga.

In the 2011 edition of the IPL there were nine matches played at the MA Chidambaram Stadium. Eight of them were won by the side batting first. That is a hefty bias. The average first-innings score was 167.

Chennai are an awesome prospect on their home turf and it will take a mighty effort from Mumbai to get off to a winning start. Or they could just win the toss.

With the toss bias in mind, it is obvious that the outsiders in this game are the value. Oddly, the outsiders are Chennai at [2.00]. The market is wowed by Mumbai's ability to field a team of internationals, clearly. They are narrow jollies at [1.98].

All eyes on Tendulkar, of course. The Little Master will open the batting and will be around [4.00] for honours. Watch out, though, for Richard Levi who will be his opening partner. Levi is the South African who against New Zealand in Hamilton made the fastest century in Twenty20 cricket. He will be around [4.50].

Back the team batting first