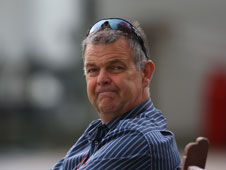 Geoff Miller is chairman of the England selectors

"If England win in South Africa the selectors will have earned the right to take a very large bow. They will somehow have achieved extraordinary results with pretty ordinary resources!"

Plenty have scoffed at the England selectors' decisions in recent times but results have shown they get it right, so is a repeat of England's 2005 tour win likely? Frank Gregan assesses...

The England selectors have announced their squad for the final big event of the year - the tour of South Africa. 2009 has been incredible for English cricket - any year in which the Ashes are won is exceptional - but this upcoming tour represents a chance to achieve back-to-back series wins against the world's finest and to get 2010 off to a flyer.

It would be an amazing achievement and given the fact that Andrew Strauss and his men were considered worthy of sponsorship from Oxo (laughing stock!) by many at the start of the year it would mark an incredible turn around in their fortunes.

The manner in which they have achieved success this year has been totally unspectacular but highly effective. The new management team under the leadership of Andy Flower have produced David Copperfield like results, the illusion is that on paper they look weak, on the pitch they are producing results!

There seems to be a real spirit within the camp, a determination to prove everyone wrong and to grind out results against the odds. Prior to the ICC Champions Trophy they were given about as much chance as Quasimodo at a Chippendale audition but despite being without their two best players (Pietersen and Flintoff) they upset the odds by reaching the semis before bowing out to the eventual champions, Australia.

The selectors take more stick than a Gold Cup contender coming up the Cheltenham hill and it is only right that when things are going well that they should get their share of the credit. They have made some very brave decisions over the past year and have got most of them right, much to the amazement of their critics.

The Pietersen/Moores debacle looked like a disaster that would haunt English cricket for a long time. KP issued the 'sack me or back me' ultimatum and the selectors obliged - by sacking him! That decision more than any other was greeted with derision but the irony is that due to KP's sacking, England stumbled upon a thoroughly decent skipper in Strauss. Many scoffed at the selectors choice (myself included,) but he repaid the faith that they had shown in him in spades during the Ashes. Remember how low morale was going into the final test? Strauss showed tremendous captaincy and somehow got his team over the line.

And so to the present and the squad the selectors have put together for the tour of South Africa. One has to wonder at the logic of Steve Harmison's 'play me or ditch me' ultimatum particularly in light of what had happened to a much bigger fish - Pietersen. What was Harmison thinking about? You could almost hear the selectors saying "Bye bye Steve, don't slam the door on your way out!"

The squad has a distinct 'same old - same old' feel to it. Luke Wright being offered the chance to fill Andrew Flintoff's shoes is a bit like asking Stephen Fry to fill in for Stephen Hawking! Both Wright and Fry are good , but unlike the originals, neither fall into the genius category!

The selectors have opted to call up Harmison's team mate Liam Plunkett as his replacement. Plunkett had a good season for Durham taking 49 wickets at 24 runs apiece whilst Harmison took 51 wickets at a cost of only 22! Work that one out!

It's easy to ridicule that decision as well as the decision to bring in Steve Davies ahead of Tim Ambrose and to give yet another chance to Sajid Mahmood albeit in the one day form of the game. It stinks of futile tinkering, deckchairs and the Titanic and all that. But the bottom line is that this group of selectors have made some strange judgement calls in the past and they have come up trumps. They seem to posses the Midas touch.

England had not won in South Africa for 40 years until 2005 (Strauss is the only survivor from that squad) so it is hardly a happy hunting ground. That series win was the precursor for the magnificent summer during which they won the Ashes. This time around they have to do it in reverse order and are [4.9] to win the series.

Should they manage it, it will complete one of the best spells in the recent history of English Test cricket. Consecutive series wins against the West Indies, Australia and South Africa - that is no mean feat! A match should also be attainable in the region of [5].0 for England to win the one day series. It's a big ask but that is a very big price and is well worth considering.

The record books don't lie, but having watched every Test England have played this year it is obvious that they do fib a little! If England win in South Africa the selectors will have earned the right to take a very large bow. They will somehow have achieved extraordinary results with pretty ordinary resources!