Cricket > Betfacts > The Ashes Betting: Gone are the days of the Broad waist

The Ashes Betting: Gone are the days of the Broad waist 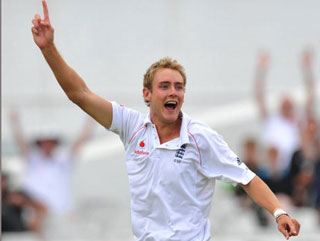 Broad smile. Staurt Broad celebrates a wicket and will have to take plenty if England are to defend te Ashes this winter

"Beefy used to knock back the tonic with a three letter additive but it definitely wasn’t 'Iso!' Phil Tufnell’s idea of a healthy breakfast was lightly toasted tobacco and the only use he could find for an ice bath would have been to keep his beer in it! "

Frank Gregan discusses Stuart Broad's latest fitness regime and wonders how the likes of Ian Botham and Alan Lamb would have got on if they'd played in the icebath and energy drink era...

Stuart Broad didn't enjoy the test series against Bangladesh. Instead of charging in and demolishing the stumps, Broad was sent to the National Academy at Loughborough for 'conditioning' and has said that he was subjected to a brutal training programme.

He has stated that he understood the reasoning behind the decision and is sure that he will be better for the break even though it wasn't restful. It shows how much the game has changed in recent years when you consider that the preparation and training that this generation accept as the norm would have had the likes of Sir Ian Botham and Phil Tufnell diving for cover.

Beefy used to knock back the tonic with a three letter additive but it definitely wasn't 'Iso!' Phil Tufnell's idea of a healthy breakfast was lightly toasted tobacco and the only use he could find for an ice bath would have been to keep his beer in it! Some of the legends of English cricket such as Colin Cowdrey, Alan Lamb, Darren Gough and even the great WG Grace would never have queued at a salad bar!

It's not solely an English trait and it's not restricted to players from the past with the proof being that Shane Warne, Virender Sehwag and Graeme Smith would all be shopping at Evans if they were women! But much more alarmingly, would those three tremendous talents have been cast aside because of their size if they had been born fifteen years later?

The answer is no. Youngsters coming through the elite academy system are much better educated than their peers from yesteryear. 'Big Boned' is an urban myth; it's over-indulgence that causes the waist to expand and the knees to creak under the strain of the weight. Had the game's former greats been subjected to the same regime then their talent would still have come to the fore but courtesy of dietary education, they would have had a different body shape with which to display it and a knowledge of how to prolong their careers.

Trying to compare sportsmen of a different generation is harder than being the French football team's bonding coach and cricket is no exception. What can be compared is the physical fitness, pace, agility, diets and the amount of time spent out in the middle. Cricket is quickly catching other sports up and producing athletes that are fit and lifestyle disciplined with Tiger Woods-like body shapes.

As a consequence, fielding has improved dramatically, bowling speeds are getting faster and the running between the wickets is much sharper. Put all that into the mix and the logical conclusion is that the game is better now than it has ever been.

The downside is that there's much more cricket being played which will have serious consequences for the fast bowler. It's a straight forward case of miles on the clock and the likes of Stuart Broad needs to be rested. Whatever conditioning programme they are subjected to during these down periods has to provide a rest from the repetitive joint stress that occurs every time a quickie charges in.

The prelude to the Ashes - the one day series against the Aussies - is underway but the Ashes is still the market to be aware of with England having been traded to win the series at a high of [5.0] and a low of [3.5]. The Test market is likely to react a little to the form being showed by the two sides during the one-dayers given most of the key men in the Ashes battle such as Ricky Ponting, Michael Clarke, Mike Hussey, Kevin Pietersen and Graeme Swann are also involved in the Natwest Series.

If either team performs poorly in this series they will drift in the Ashes market which will provide a great back opportunity because a one-dayer at the Rose Bowl bears no resemblance to an Ashes Test Match. One thing is for certain, if England are to be a force Down Under, Stuart Broad and the remainder of the English quicks will have to be at their very best and if their tachograph is showing that a rest is in order, then so be it!