Day 2 of the 2016 US Open on Tuesday provides more entertaining clashes as SportNeverSleeps pick out their best bets...


"The Romanian ace has had solid preparation for this tournament with a triumph in Montreal followed by a run to the last four in Cincinnati. However, her opponent has picked up some impressive wins too over the likes of Belinda Bencic and Caroline Garcia at New Haven."

It was an action-packed opening day in New York on Monday, and although most of the seeded players made it through, some experienced tougher matches than others.

The focus on Tuesday switches to the top half of the draw, and amongst those in action is world number one Serena Williams who begins her quest for a 23rd Grand Slam title.

Halep to be made to work by Flipkens

Our first tip comes courtesy of Simona Halep's match with Kirsten Flipkens, with the former looking to build on a 17-2 run since the start of Wimbledon.

The Romanian ace has had solid preparation for this tournament with a triumph in Montreal followed by a run to the last four in Cincinnati.

However, her opponent has picked up some impressive wins too over the likes of Belinda Bencic and Caroline Garcia at New Haven.

Flipkens can be a very tricky customer, but as seen in their head-to-head record, which Halep leads 4-0, she seems to have the drop on her.

They haven't crossed paths since 2014 though, and their more recent meetings have been relatively close. We expect Halep to prevail in straight sets in this one, but it might not be as straight forward as she likes so look for value with Flipkens in the games market.

Elsewhere, Eugenie Bouchard will be hoping for a happier time at the US Open this year, 12 months on from being involved in a freak locker room incident that left her with concussion.

The Canadian star has had a better 2016 where she's shown signs of getting back to her former self, although she isn't there yet.

It's difficult to have full faith in her to put together a strong run, particular at the Grand Slams, as she now takes on Katerina Siniakova in the first round.

The pair have never met before, but Siniakova will be desperate to claim her first ever win at the US Open against a big name. We expect to see Bouchard's name in the second round though and we're confident that she'll put in an assured performance in this one.

Robson back on track ahead of all-British showdown

It's been a frustrating wait, but Laura Robson is starting to get back to business after being blighted by a long-term wrist injury.

After landing an ITF title in Pennsylvania this month, she cut short a holiday after receiving a wildcard into the qualifying draw at the US Open and proceeded to put together a three-match winning streak in New York.

Her reward is a clash with fellow Brit Naomi Broady, and while it will be a really tough test for her, Robson finally has some confidence and momentum on her side. Back that to carry her through to the second round with a big win over her compatriot. 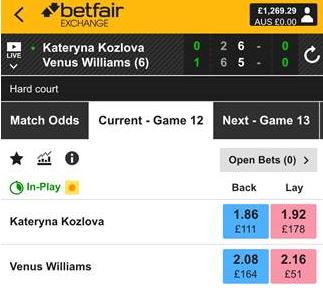