Winning at the Wynn 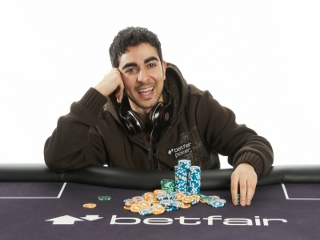 It has been quite a profitable couple of days in Vegas after I chopped the "really easy" $200 rebuy tournament at the Wynn, which I mentioned in my previous blog entry, for $16,500. What made the victory all the more sweeter was the fact I chopped it up with my roommate for the trip! We were going to go out to celebrate but after a few late nights and the fact this tournament didn't finish until 0100 we just went to bed instead.

The following day, Thursday, I went shopping and impulse bought some trainers that are almost certainly going to have been returned by the time you have read this blog. They really aren't for me and I think I only bought them because I was wrapped up in the euphoria of winning a tournament. Thursday night was even more expensive after my plans for long cash session were ended prematurely by me being dragged out on what turned out to be a 12 hour session! We didn't leave Spearmint Rhinos until gone 0500 and even then we went to an after-party. I eventually got to bed just after 0900!

Needless to say Friday was a serious recovery day and I planned to take it nice and easy and chill until I was due to play in the Main Event. I was due to play on Sunday (Day 1d) but this has now been changed to Saturday (Day 1c), which means I will most likely miss going to the Palms with the rest of the Betfair Poker players. Apparently the Playboy bunnies hang out there, so that would certainly have been something to look forward to. I even had my flipcam ready to send you some video evidence of how good they really were. Never mind, I'll just have to win the "really easy" WSOP Main Event instead.

Before I go, I have rediscovered how to use Twitter so you can follow me here for chip counts and general non-insightful tweets!