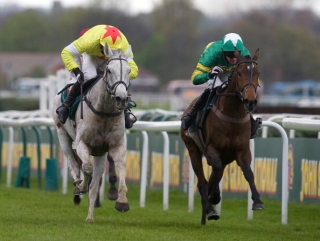 Grey Neptune Collonges gets up to deny Sunnyhillboy

"The 2012 Grand National provided a terrific spectacle with Neptune Collonges getting up on the line to deny Sunnyhillboy by a nose..."

Timeform look back at Grand National weekend, where Neptune Collonges triumphed in a thrilling finish over Sunnyhillboy in the big race. Trainer Nicky Henderson was also in fine form at Aintree, and there was some high-quality Irish racing on Sunday...

The 2012 Grand National provided a terrific spectacle with Neptune Collonges getting up on the line to deny Sunnyhillboy by a nose, the closest ever winning margin in the race. Neptune Collonges' bare performance, denying a BHA mark of 157, is one of the best that has been seen in the race with not many National winners able to match the rating achieved. More can be found on his winning effort in the latest Nicholls' Weekend Runners: The Timeform Review article.

Sunnyhillboy's agonising defeat came after the nine-year-old had jumped and travelled exuberantly and he will presumable be aimed at this race once more in 2013, although he will have a higher mark to contend with.

Seabass, the main gamble of the race, emerges with huge credit after a third-placed finish, whilst Cappa Bleu was left with more to do than ideal and is value for finishing much closer to Seabass than the seven-length gap. Last season's winner Ballabriggs gave another good account in finishing sixth from a 10 lb higher mark and it may be worth aiming him at other valuable races next autumn and winter prior to a third tilt at the National, as he is effective at shorter than this distance.

Unfortunately, the race will also be remembered for the two fatalities that occurred, namely Gold Cup winner Synchronised and According to Pete. The former fell at Becher's the first time around, but ran loose after and sustained an injury after a subsequent fall at the eleventh. According to Pete was brought down at second Becher's by On His Own's fall, resulting in an injury that meant he was unable to be saved.

Nicky Henderson initially looked to be on the brink of securing the trainer's championship, as Simonsig, Sprinter Sacre and Oscar Whisky won the first three races on Aintree's card. Simonsig is the top novice hurdler of the season based on his easy Cheltenham victory, and he followed that win up here in similar style. He has plenty of speed, and will have no trouble in dropping back to two miles next season, whether it is for a campaign geared towards the Champion Hurdle or as a novice chaser in the Arkle.

Sprinter Sacre was in a different league to his three rivals, jumping boldly in front having forced his rider to let him stride on at the sixth, and he simply coasted home. He is already a short-priced favourite for the 2013 Champion Chase, which really comes as no surprise.

Toubab travelled strongly after being waited with but made a mess of the second last before being asked for his effort, and his future prospects will somewhat depend on the handicapper's view of this runner's-up effort to his outstanding rival.

Oscar Whisky confirmed that he is a top-class hurdler in winning the Aintree Hurdle 12 months on from his victory in the same race, the finish being almost identical to that contest with Thousand Stars closing at the finish. The winner would be well worth trying in the Champion Hurdle again next season, having finished third to Hurricane Fly in 2011.

International action of note on Saturday evening came from Keeneland where Dullahan triumphed in the Grade 1 Blue Grass Stakes, beating last year's Breeders' Cup Juvenile winner Hansen; the winner can now be backed at [8.0] for the Kentucky Derby, with Hansen available at [15.5]. Click HERE to read the latest edition in Timeform's US series "Road to the Kentucky Derby: The Churchill Downs contenders".

Leopardstown staged a fascinating seven-race card on Sunday, which included trials for the 1,000 and 2,000 Guineas and a race that was effectively a Derby trial. The 2,000 Guineas trial went the way of Furner's Green, trained by Aidan O'Brien, who readily beat Akeed Wafi by two and three-quarter lengths. He looked to have plenty in hand and, whilst at the moment he is some way off 2,000 Guineas-winning standard, he may have a bit more improvement to come.

Aidan O'Brian also took the 1,000 Guineas trial with Homecoming Queen, who dictated affairs and proved willing in the finish when denying Fire Lily by a neck. However, it was the O'Brien-trained Up (third) who really caught the eye, left with too much to do but finishing best of all. She looks certain to win a similar race, and could well be up to contesting better races. The winner and the third are both available to back in the 1,000 Guineas market.

Light Heavy won the Group 3 Ballysax Stakes, emerging as a real candidate for the Irish Derby in the process. He is expected to improve again for the step up to a mile and a half, and could take his chance in the Derrinstown Stud Trial in around a month's time, for which he will command plenty of respect. David Livingston finished fifth, but is not one to write off just yet. He reached a smart level as a two-year-old, and was not knocked about after making some smooth progress.

Finally, French superstar juvenile Dabirsim lost his unbeaten record at the hands of ex-Irish Dragon Pulse in the Prix de Fontainebleau at Longchamp on Sunday, going down by a short-head after being given an over-confident ride by Christophe Soumillon.