Handicappers' Corner: Not a grey day for Neptune 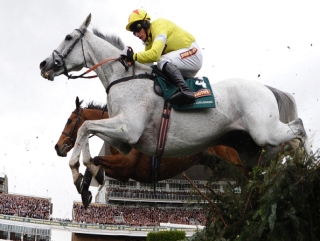 Neptune Collonges on his way to National glory.

The fallout from Saturday's Grand National centred on another dark day for racing's image to once-a-year punters, plus a decisive blow by Paul Nicholls in the battle for the trainers' championship, yet not enough column inches have been devoted to the winning performance put up by Neptune Collonges argues Timeform jumps handicapper Phil Turner....

Racing historians will point to the fact he is the first grey to have won the Aintree showpiece since Nicolaus Silver back in 1961 but, of more significance, is the fact that Neptune Collonges is the highest-rated Grand National winner since Timeform began publishing National Hunt ratings in the early-sixties.

Indeed, his rating of c166 is just 1 lb below that achieved by the ill-fated Synchronised (c167) in winning last month's Cheltenham Gold Cup - for the record, the legendary Red Rum is the only Grand National winner to have posted a higher figure than that season's Gold Cup winner during the period in question (he was rated 5 lb higher than Davy Lad in 1977).

This arguably shouldn't come as a great surprise, however. After all, Neptune Collonges is a top-class chaser who's twice made the frame in the Cheltenham Gold Cup himself during a golden era of staying chasers (mainly from his own yard!), whilst the BHA handicapper regularly frames the National weights in favour of those towards the top of the handicap nowadays. Therefore, despite unflattering Betfair SP of [43.43], Neptune Collonges was actually one of the best-handicapped runners in the field and his win merely underlines that handicapping issues, rather than the "Aintree factor", are increasingly the most important thing to look at when assessing National prospects. Last year's hero Ballabriggs (c159), for example, ran another honest race to finish sixth, but simply had too much weight this time around, with all five of those who finished in front of him potentially well handicapped for one reason or another.

As should happen to all grey-haired veterans, Neptune Collonges will now enjoy a well-deserved retirement and won't be back to defend his crown in the 2013 Grand National. Sunnyhillboy (c151) will almost certainly be back to try and go one better in 12 months time, when he'll have plenty of supporters having lost out in the closest-ever Grand National finish this time around (when he was Timeform's top-rated runner). In our view, however, fourth-placed Cappa Bleu (c153) and faller On His Own (c143+) may be the two to take from this year's race with regards to future Nationals - Cappa Bleu was arguably left with too much to do before keeping on strongly late, whilst On His Own was moving powerfully into contention when falling at second Becher's.

Aintree's three-day meeting, of course, is about much more than just the Grand National nowadays and there were plenty of top-class performances on show elsewhere. The Nicky Henderson-trained Sprinter Sacre (c175p) cemented his position as Timeform's highest-rated novice chaser since our Chasers & Hurdlers' series began in 1975/6 with a bloodless win in the Maghull Novices' Chase on Saturday. He still looks a certainty for the 2013 Queen Mother Champion Chase, even though reigning champion (and stable-companion!) Finian's Rainbow (c174) was in imperious form himself when winning the two-and-a-half mile Melling Chase twenty-four hours earlier.

Henderson's seemingly bottomless pit of young talent has been well documented in recent months, though champion trainer Paul Nicholls still has more than his fair share of promising performers, which includes Silviniaco Conti (c158+) and Edgardo Sol (h143+, c160+), who were both very impressive when winning at Aintree last week. Silviniaco Conti got firmly back on track after a rare below-par effort at Ascot last time (he missed the Cheltenham Festival as a result), whilst Edgardo Sol proved a revelation when running away with the Red Rum Handicap Chase on Thursday - he's mixed hurdling and chasing of late, so he'll be a very interesting runner if taking his chance in the Scottish Champion Hurdle at Ayr this weekend.

Elsewhere on the hurdling front, Grumeti (h148+) can be viewed as this season's leading juvenile after reversing Triumph Hurdle placings with Countrywide Flame (h147) in a fine finish to the Anniversary Hurdle on Thursday, whilst Big Buck's (h176+) hardly broke sweat in entering the history books with his 17th consecutive win earlier that afternoon.

Two horses who'd failed to stay when taking on Big Buck's at Cheltenham proved much more at home back at two and a half miles on Saturday - indeed Oscar Whisky (h167) and Thousand Stars (h163) fought out a near-identical finish to the 2011 Aintree Hurdle, with the former again just coming out on top. Third-placed Rock On Ruby (h171) wasn't beaten by the trip and possibly hadn't got over his Cheltenham exertions - he's worth another chance to confirm the form of his Champion Hurdle win.