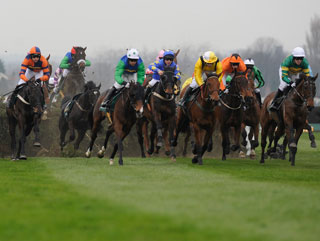 Who are you backing in the National?

"Synchronised will be bidding to become the first horse since Golden Miller in the 1930s to bag the National and the Cheltenham Gold Cup in the same season..."

Timeform preview a weekend that is most certainly headed by the Grand National, but Aintree's undercard is full of quality and there are classic trials at Leopardstown on Sunday...

As ever, Saturday's Grand National looks incredibly competitive but, if you'd prefer not to rely wholly on Lady Luck, Timeform are here to help with a comprehensive Runner-By-Runner Guide to the big race, as well as a Beginners' Guide to betting on the most famous steeplechase in the world. For all the latest news, tips and features articles be sure to keep a close eye on the 'Grand National' section of Betting.Betfair.

As for the race itself, likely favourite Synchronised will be bidding to become the first horse since Golden Miller in the 1930s to bag the National and the Cheltenham Gold Cup in the same season, while Giles Cross landed the Haydock Grand National Trial last time, a race Mon Mome, Earth Summit and Party Politics were all beaten in prior to winning their respective Nationals.

Of the supporting races, the Maghull Novices' Chase, one of two Grade 1s, may be short on numbers but it's not short of a star attraction with the peerless Sprinter Scare due to take centre stage. The Timeform 174p-rated six-year-old was a ready winner of the Arkle at Cheltenham last time and looks sure to be well suited by the relative speed test of Aintree on his first course start.

The other top-level race, the two-and-a-half-mile Aintree Hurdle, sees Champion Hurdle hero Rock On Ruby reopposed by stablemate Zarkandar. Also in the line-up is Oscar Whisky, who didn't stay when only fifth in the World Hurdle and is expected to perform much better back at his best trip. With Paul Nicholls and Nicky Henderson both taking the wraps off some of their biggest guns, the race could have a significant bearing on the trainers' championship.

Henderson will be hoping to start the day as he means to go on with Simonsig in the opening Grade 2 Mersey Novices' Hurdle. The six-year-old grey, who ran to a Timeform figure of 157 when running away with the Neptune, has at least 24 lb in hand of his rivals and it will be a major surprise should he fail to win.

Also on the Aintree card is a listed handicap chase that it often pays to keep a close eye on. Won 12 months ago by one-time National favourite Prince de Beauchene, the ratings for this year's race are headed by veteran Noland, For those looking for one who may have slipped under the radar, Brackloon High, is potentially better than his well-held effort in the Kim Muir last time.

The Aintree card also features a conditional Jockeys' Handicap Hurdle over an extended two miles and a Grade 2 bumper.

There are also jumps meetings staged at Chepstow and Newcastle on Saturday as well as all-weather action at Lingfield, where the listed International Trial Stakes heads the card, and Wolverhampton (evening). Tramore's National Hunt card is the sole meeting in Ireland

As previousy mentioned, though there's jumps meeting at Ffos Las, Market Rasen and Tramore on Sunday, the most interesting racing with regards quality is staged on the Flat at Leopardstown.

Only four go to post for the Group 3 2000 Guineas Trial Stakes but Aidan O'Brien, John Oxx and Jim Bolger are all represented. Furner's Green, second to Bolger's Light Heavy over course and distance on his return, comfortably heads the Timeform figures.

The 1000 Guineas Trial is much more competitive, however, with the top five in the nine-runner race separated by just 3 lb. Heading the list is David Wachman's Fire Lily, closely pursued by O'Brien's Up, the latter also retaining a Timeform 'p'.

Although the card also features a listed race for older horses over a mile, the Group 3 Ballysax Stakes, a recognised Derby trial, is sure to attract most of the attention. O'Brien, who has won the race with the likes of Galileo, High Chaparral, Yeats and Fame And Glory in the past, saddles three headed by David Livingston, while Jim Bolger, who sent out filly Banimpire to score last year and Puncher Clynch 12 months before that, has declared Light Heavy and maiden While You Want.

There is also group race action at Capanelle in Italy, Dusseldorf in Germany and Longchamp in France, the last-named staging the one mile Group 3 Prix de Fontainebleau that sees the clash between Dabirsim, Dragon Pulse and Sofast.
............
Get the Timeform Jury's verdict on today's Aintree BBC races with Timeform TV Focus. Click HERE to find out more about this successful tipping service.