US Triple Crown: O'Brien pair among the entries 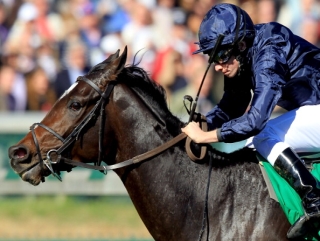 Wrote in action at the Breeders' Cup.

"The way he [Wrote] powered to the front in the Juvenile Turf left the impression he is likely to improve further..."

A healthy 397 entries have been made for the US Triple Crown, with a smattering of British and Irish-trained horses in the mix, including two from Ballydoyle...

US Champion two year-old colt Hansen (Timeform rated 121), winner of the Breeders' Cup Juvenile, and Union Rags (123p), a Grade 1 winner himself and arguably an unlucky runner-up to Hansen at Churchill Downs, are both currently to the fore in the market for the Kentucky Derby, the latter trading as favourite at [9.0] whilst Hansen is at [17.0].

The Aidan O'Brien-trained Wrote, winner of the Breeders' Cup Juvenile Turf, is rated 118p and is currently trading at [19.0] for the Kentucky Derby. The three-year old, by dual Breeders' Cup Turf winner High Chapparal, was progressive through last season, and the way he powered to the front in the Juvenile Turf left the impression that he is likely to improve further.

The Ballydoyle handler has also entered Daddy Long Legs (116), winner of the Royal Lodge at Newmarket last season (Wrote finished third) and last seen when apparently not taking to the surface in the Juvenile Dirt in November.

Godolphin have made four entries, headed by Zip Top (111), who has transferred to the Mahmood al Zarooni yard after finishing runner-up in Doncaster's RP Trophy.

Prince Alzain (98p), trained by Gerard Butler, also features among the entries, as does the Jeremy Noseda-trained Harvard N Yale (97), who finished second to the aforementioned colt when last seen at Wolverhampton.