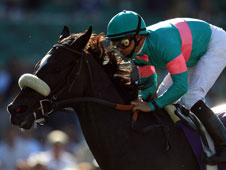 "Zenyatta preserved her unbeaten record in five starts in 2009, signing off another memorable season with her own man-eating success in the Breeders’ Cup Classic."

But Rachel Alexandra is marginally favoured by bettors

US horseracing received a welcome boost last night with news that the brilliant Breeders' Cup Classic winner Zenyatta is to stay in training this year - and she may well start her 2010 campaign as the US Horse Of the Year.

She is currently evens on Betfair to win the prestigious award at tomorrow's 39th annual Eclipse Awards ceremony, with the market narrowly favouring the claims of [192] chance Rachel Alexandra.

Rachel Alexandra was unbeaten in eight races in 2009, winning five Grade Ones and beating the males three times, leaving a whole host of big race winners trailing in her wake when triumphing in such prestigious races as the Preakness, Haskell and Woodward Stakes.

But Zenyatta was not to be outdone, and preserved her unbeaten record in five starts in 2009, signing off another memorable season with her own man-eating success in the Breeders' Cup Classic.

Betfair spokesman Tony Calvin commented: "Last night's announcement raises the mouth-watering prospect of US racing's Page 1 girls finally meeting this year, and our market gives them the opportunity to go head-to-head for the first time in 2010.

"The fact that Rachel Alexandra is slightly favoured in the market may surprise punters in the UK given Zenyatta's high-profile win at Santa Anita.

"But with a large concentration of eligible voters located on the East Coast, Rachel Alexandra looks the marginal, but justified, favourite on that basis."

The Eclipse champions are determined through voting by NTWA members, Daily Racing Form employees, NTRA-member designates and Equibase personnel, who vote for the top three in each category. Winners are based solely on first-place votes, with second- and third-place votes used to determine finalists. The exception is the Horse of the Year race. In a rule change this year, voters chose just one horse.

The 2009 Eclipse Awards ceremony will be held tomorrow at the Beverly Wilshire Hotel in Beverly Hills, California, and televised live on TVG.