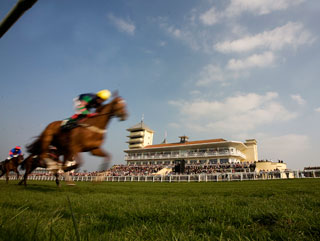 A £5,000 prize awaits the horse that crosses the line first in either of our races at Towcester

"The two Betfair-sponsored races, which carry a prize money fund of £5,000 per race, will take place on Thursday November 3 and Sunday November 20 2011."

Prizes of £5,000 await the winners of our two new races for emerging point to pointers

Betfair today announces a sponsorship deal which will see two newly-designed races being run at Towcester, with the sole purpose of supporting the production of steeplechasers emanating from the British point-to-point scene.

The two Betfair-sponsored races, which carry a prize money fund of £5,000 per race, will take place on Thursday November 3 and Sunday November 20 2011.

Betfair spokesman Tony Calvin said: "We see this as an opportunity to help stimulate commercial interest in British-produced point-to-point horses. We believe they are every bit as good in quality as their Irish counterparts.

"By introducing these races at Towcester, a course that complements this type of young horse, we hope to promote the grass roots of the sport by giving potential steeplechasers the opportunity to progress through the system.

Paddy's punter would have won more on Betfair

Congratulations to the Paddy Power punter who is celebrating a big win - but he would have scooped better odds and more cash with Betfair......

Half-price tickets to Betfair Super Saturday up for grabs

To celebrate the fact Betfair are sponsoring the entire card at Newbury on February 11, the racecourse is giving you the chance to buy half-price tickets to this fantastic day out. It will also be a chance for Denman fans to see the great champion in the flesh....

The Betfair Paul Nicholls Distance has its first winner, but it took a dramatic dead heat at Ludlow to secure the £4,000 for the winning punter......