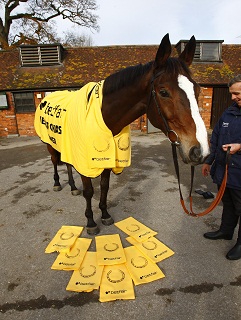 "As Betfair knows how much Kauto Star means to racing fans, we wanted to give those you the chance to win a piece of Betfair Chase history."

Kauto Star made history on Saturday, winning the Betfair Chase for a record fourth time. To mark his stunning victory, we are giving you the chance to win exclusive Betfair scarves stamped by the legendary horse as well as, for one lucky person, a limited edition framed photo print signed by Paul Nicholls and stamped by Kauto...

While some people believed Kauto Star was on his last legs, he has never been one to read the script and, in beating favourite and Gold Cup winner Long Run into second at Haydock on Saturday, he broke the course record.

Paul Nicholls described the victory as "the best ever" - a pretty significant statement from a six-times Champion trainer!

As Betfair knows how much Kauto Star means to racing fans, we wanted to give you the chance to win a piece of Betfair Chase history.

We asked Kauto to make another stamp on the race and give his hoof 'signature' on a photo print as well as a limited number of Betfair scarves (see picture below).

To be in with a chance of winning one of these fantastic pieces of memorabilia, follow our Twitter feed, @BetfairRacing, and tweet what makes Kauto a Star to you, using the hashtag #KautoYouStar.

The best entry, as chosen by Paul Nicholls, will win the top prize of a framed photo of Kauto winning the big race, signed by trainer and stamped by horse, with a selected number of runners-up winning a scarf.

Closing date for entries is midnight on Tuesday 29 November.