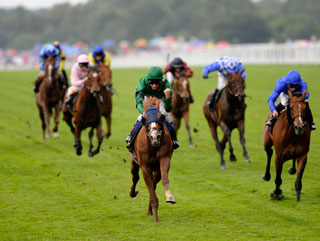 "Beachfire is a well-known hold-up performer who tends to get outpaced, hence why he has traded bigger in-running for all five wins – three times bigger than double his Betfair SP."

As mentioned last week, Royal Ascot gave us plenty of hints and tips for future in-running trades but this week I thought I would look at some of those horses who trade at bigger prices in the run and the best way of trading on them.

Beachfire - I start this with a wealth warning. Beachfire has been written about in the racing press both before and after Royal Ascot so you are competing in an educated market place. John Gosden's four-year-old is a well-known hold-up performer who tends to get outpaced, hence why he has traded bigger in-running for all five wins - three times bigger than double his Betfair SP (BSP). His record over one mile to ten furlongs is five wins from seven starts. Definitely a horse worth splitting your backing stakes between pre-race and in-running over his premium conditions but maybe one to put an offer to lay out around evens when campaigned over 12 furlongs.

Memory - Richard Hannon's 3yo won three times at two and on each occasion she traded considerably bigger (BSP [3.54], IR [21.0]; BSP [9.87], IR [50.0]; BSP [2.4], IR [4.8]) but of course these were over trips shorter than her breeding suggests she will ideally need. She made her seasonal reappearance in the 1,000 Guineas when she all but refused to race, but then suggested that was a one-off in the Coronation Stakes when getting away fine. What was interesting for me that day was that Memory was keen (it was virtually a seasonal reappearance anyway) but that connections still held her up, attempting to deliver her late. We are likely to see her next in the Falmouth Stakes and my play would be to wait a few seconds to make sure she races, and then back her at whatever price is available, if bigger than the BSP. If she ever goes off a short price I will be laying her pre-race and back in-running to create a position.

Sands Of Dee - Let us just lower our sights slightly and look at an interesting character, trained by Dandy Nicholls. being a 4yo sprinter Dandy will no doubt get to the bottom of Sands Of Dee but at the moment he gets pushed along from a couple of furlongs out, stays in contention yet in the main fails to find. His best runs have come over the sprint trips on good ground or softer. Under these conditions I will be backing him in-running just slightly above BSP and then putting a low lay offer in the system to have the field winning. He has four odds-on trades in defeat already.

So, there you have it, a few quirky characters who trade bigger in the run for various reasons. These horses can be real money spinners because you can always put up a couple of speculative higher offers as well as the sensible plays.