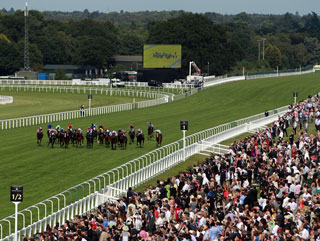 Somewhere in the pack is St Barths, meeting interference

"I hope connections run St Barths up with the pace next time, but if he is held up again, I will be supporting him while out the back and then laying off in case he hits trouble again."

Royal Ascot 2011 is over, long live Royal Ascot 2011! I think it had a bit of everything: split opinion - some were excited by Frankel's run, others disappointed; pure emotion - Michael Owen's reaction to Brown Panther's win; amazement - no winner during the five days for Sir Michael Stoute; happiness - the Queen looked at one with the world everyday; surprise - James Fanshawe hasn't had the best of times recently but his Saturday double proved how good he is with sprinters.

For me personally it was a very quiet one, due to other commitments. Prohibit was a fancy of mine for the Kings Stand due to his consistent record at Ascot but I thought the ground had gone against him so left him alone. And Genki I did get involved with but he just wasn't quite good enough.

But what about the in-running angle? Well, I think that Royal Ascot 2011 proved to me that I am better off playing on the lower profile meetings, or you have to be a lot more conservative with your plays. But there are definitely some horses to take from the early part of the week.

St Barths
The Coventry Stakes always seems to throw up some good stories and I know a lot of people will have noticed St Barths' run but I think there is an in-running angle for the next few outings. We have now seen the two-year-old colt three times on the racecourse and, aside from his win at Leicester when sent off a very short price, he has encountered trouble in the run as connections have tried to deliver him from off the pace. Because he will eventually get a mile, St Barths finishes his races well. I hope connections will run him up with the pace next time, but if he is held up again, I will be supporting him while out the back and then laying off in case he hits trouble again.

Ermyn Lodge
It would have been fantastic for Pat Phelan to have had a Royal Ascot winner but he deserves full credit for the run of Ermyn Lodge in the Ascot Stakes over two miles. It wasn't a complete surprise, despite going off 16/1, as the five-year-old has a cracking record at Ascot and also on good ground so conditions suited. From an in-running point of view he is a strong traveller over extreme trips, thus he catches the eye of backers. In his last six defeats he has traded [3.05] or less five times. Unless the ground is good to firm then back pre-race and lay in-running.

I will be doing further analysis of the Ascot races over the next few days so expect more horses from Royal Ascot 2011 next week.